YOGYAKARTA, Indonesia, June 21, 2019 /PRNewswire/ — YANNI, a world’s legendary composer has postponed his ’25th Anniversary Acropolis’ concert last year at some countries due to injury he suffered. The initial schedule was to perform at the Prambanan Orchestra on October 20th, 2018 at Prambanan Temple. Both promoters, PT. Taman Wisata Candi Borobudur, Prambanan & Ratu Boko (TWC) and Rajawali Indonesia have announced recently a new scheduled date of YANNI’s concert this year. Edy Setijono, Executive Director of TWC, said that the ’25th Anniversary Acropolis’ concert will be held on July 6th, 2019, which is the second day of of Prambanan Jazz Festival 2019. 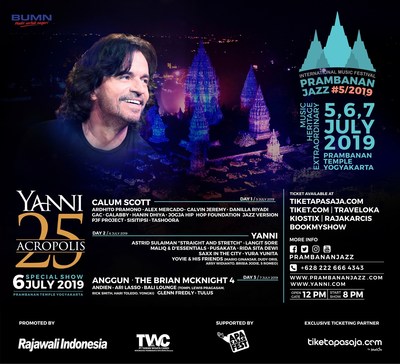 The musician has the rare distinction of being permitted to perform at some of the world landmarks because his philosophy of music “one world, one people” which reflects universal language. He has held concerts at Forbidden City in China, The Great Pyramids in Egypt, Toji Temple in Japan and Colosseum in Rome. He has held a breakthrough concert ‘Live at the Acropolis’ at The Acropolis of Athens and was filmed in September 1993 and released at the following year. The video was the second best-selling music concert video that year, with more than 7 million copies sold worldwide. This year, YANNI will make a history in Indonesia. The audience will enjoy a magical experience by YANNI and his world-class performance at the masterpiece of Hindu culture of the 9th century. “This will be an outstanding performance of two magical masterpieces that the audience may not see in the next two decades,” said Edy.

CEO of Rajawali Indonesia, Anas Syahrul Alimi, added that the concert of the maestro YANNI at the special stage of the Prambanan Jazz Festival 2019 will be exclusive as the concept and layout have been designed by YANNI’s team. The preparation will be taken very seriously that there will not be special show on the first day as the venue will be used for YANNI’s rehearsal.

Prambanan Jazz Festival 2019 will be held on 5,6 & 7 July 2019 at Prambanan Temple, Yogyakarta, Indonesia. Prior to YANNI’s show at the special stage at 8 PM Yogyakarta time, the audience will enjoy local artists performances at the festival stage such as Maliq & D’Essentials, Yura Yunita, Pusakata, Yovie & His Friends and many more.

"All Night," Third Song From BTS WORLD's Original Soundtrack, To Be Released On June 21