BEIJING, May 25, 2021 /PRNewswire/ — Quanzhou, a city in southeast China’s Fujian Province that is known for the vitality of its private economy, set its gross domestic product (GDP) for 2035 over 2.8 trillion yuan. 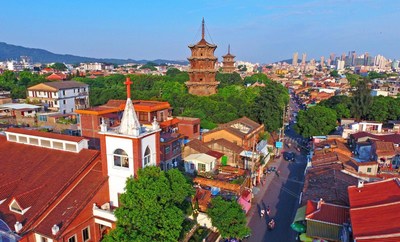 The ambitious goal was included in Quanzhou’s latest development outline released by the local government recently.

According to the outline, the city also strives to notch its GDP to around 1.5 trillion yuan and 2.1 trillion yuan by 2025 and 2030, respectively.

The city aims to make its permanent residents and the per capita GDP amount to 10 million and 280,000 yuan, respectively, by 2035.

The outline noted that the city will strive to maintain the province’s lead in terms of economic output, rank among the top of industrial clusters competitiveness rankings in the country, top the list of national innovative cities and achieve significant progress in the construction of a modern economic system during the 14th Five-Year Plan period.

Besides, the city will also focus on the optimization of the urban structure, reinforce the construction of spiritual civilization, promote ecological environment development and further improve the governance efficiency.

By 2025, the city will see the average number of years of education for the population increase to 12.5 years, the number of licensed physicians per 1,000 population reach 3.05, and the coverage of basic endowment insurance stand at 95 percent.