BEIJING, June 28, 2020 /PRNewswire/ — Guilin, one of leading tourist locations in China, has recently hosted a series of events to celebrate the Cultural and Natural Heritage Day, which falls on June 13 this year. 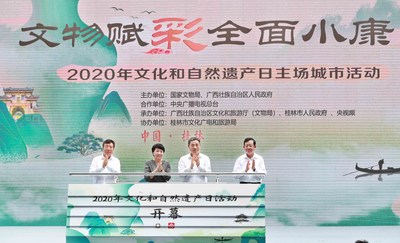 In particular, a major forum was held in Guilin to share outstanding cases nationwide, which showed how protection of cultural heritages could boost local tourism and help fight against poverty.

During the events, Jinjiang Princes’ City has impressed the participants as it is well protected.

“In order to bring the Jingjiang Princes’ City back to life, Guilin has carried out archaeological cleaning and excavation and environmental remediation on 11 princes’ tombs. All illegal buildings built against the city wall were demolished, so that the ancient city wall was exposed,” said an official of the local government.

In addition to the government’s efforts to protect the natural and cultural relics, individuals are also joining the campaign in the protection of cultural heritages.

During the events, an award ceremony was also held to reward the individuals for their contributions to the protection of the cultural heritages.

Tang Yijin, a 76-year-old villager in Guilin, has spared no effort to protect the cultural relics for many years. In 2009, he bought a group of ancient residential buildings with characteristics of the traditional buildings in north Guangxi and relocated them, avoiding their demolition due to the railway expansion.

When receiving the award, he said excitedly, “This honor is both a reward and a spur, and I will continue the cause of cultural relics protection and inheritance as always in the future.”

During the events, an intangible cultural heritage experience hall in Guilin was inaugurated, focusing on the local opera and arts.

Since 2018, Guangxi has launched the construction of special museums. The number of museums in the region has been up to 252, with nearly 20 million visitors annually, according to an official of the Culture and Tourism Department of the region. (Edited by Hu Pingchao with Xinhua Silk Road, hupingchao@xinhua.org)