BEIJING, Oct. 26, 2021 /PRNewswire/ — China’s financial sector, after having facilitated the stable economic recovery in the first half of 2021, is urged to well adhere to the safety bottom line and showcase more resilience and vitality to propel the high-quality development of the economy in the second half of the year. 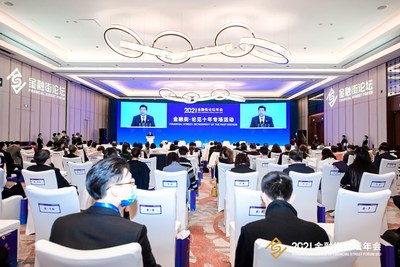 Experts made such remarks during the 2021 Annual Conference of Financial Street Forum held recently, saying that China’s financial sector has been facing both external shocks arisen from the possible policy change of central banks of developed economies such as the U.S. Federal Reserve and internal worries caused by debt crisis of some companies.

Pan Gongsheng, deputy governor of Chinese central bank and head of the State Administration of Foreign Exchange, said that compared with the last round of tightening cycle of the U.S. Fed, China’s economy stays currently in a better position in the present economic cycle, meaning that the national economy maintained its recovery momentum, which cemented the basis for China’s forex market to guard against external shocks.

Yi Gang, governor of Chinese central bank, said the debt crisis of Evergrande Group represented individual case of debt crisis risks and one third of its around 300 billion U.S. dollars of debts is financial liabilities with both decentralized creditors and collaterals, indicating controllable spillover risks for the financial industry.

Since the start of the third quarter, increasing domestic and foreign risks and challenges caused more pressures on China’s economic structural transformation and against such backdrop, better distribution of financial resources became particularly important.

When talking about insurance, Guo Shuqing, head of CBIRC said that despite being the second largest by premium incomes worldwide, China’s insurance sector still needs improvement in its density and depth and the pertinence and diversity of insurance coverage are also insufficient.

Majority of Organizations Uncertain They Can Recover From a Ransomware Attack, Says New Dell Technologies Report