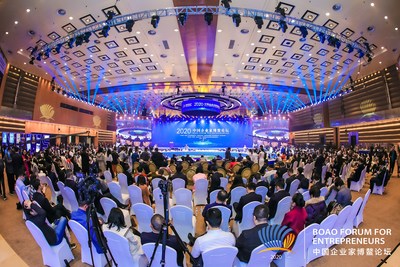 Li made the remarks at the 2020 Boao Forum for Entrepreneurs held in Boao, a town in south China’s Hainan Province during December 4-5.

Li addressed that Chinese enterprises should strive to steadily improve their companies’ modern operation and management level in an attempt to make themselves stronger.

As a representative of Chinese mild flavor liquor brand, Fenjiu Group has innovated over the past three years and made impressive achievements.

The liquor maker has strode into the “ten billion-plus club” of China’s liquor industry with the market value surpassing 100 billion yuan after three years of reform, making it a role model for the reform of state-owned enterprises (SOEs).

In 2019, the alcohol brand has witnessed a surge in its sales revenue, with its alcohol income nearly three times that of three years ago.

Despite the impact of the COVID-19 pandemic this year, the company saw its revenue growth in the first three quarters of this year rank among top three liquor making companies in China, while its net profit growth top the list of the sector.

Li also noted that Fenjiu should further deepen its reform based on the domestic cycle as the mainstay and with domestic and international development reinforcing each other,in order to continuously improve the company’s competitive advantages.