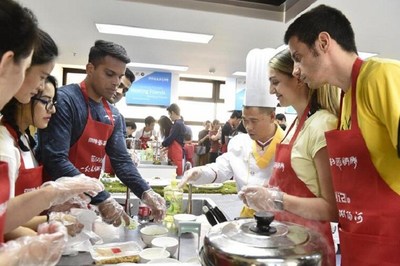 “These are camellia oil, fermented local (Liuyang) brown bean, chili powder and locally preserved meat”. Following the introduction made by the working staff, Lydia Taghzouit , who is from Algeria, started to cook the Liuyang steamed cuisine.

When the fragrant smell rose from the steamer beside her, she exclaimed, “what a wonderful taste!”

“I know the rhythm of the song named Liuyang River and I like China’s fireworks. I can’t believe that there is such interesting food in this magical land, and it is very simple to cook. I want to go back and have a try and I will buy some materials to share with my friends,” said Andres Mora, who is from Colombia.

During the show, 20 creative steamed cuisines of four series were cooked and brought to the dining table.

According to Gao Zhi, head of management committee of Liuyang Cultural Industrial Park, “Liuyang people preserve the original flavor of food through most simple and healthy way. This is not only a cooking method, but also a life attitude and wisdom.”

“By adding cultural creativity to traditional steamed cuisines, we want to provide a Liuyang solution of eating to more people, and we hope today’s event can promote the internationalization of Chinese cuisine,” Gao added.