BEIJING, Aug. 23, 2019 /PRNewswire/ — AQUA, a global brand of Haier Group which was officially launched in Indonesia in 2015, donated televisions, refrigerators, washing machines, stationery, books and notebooks to an orphanage in Solo, a city in Central Java Province of Indonesia on Tuesday. 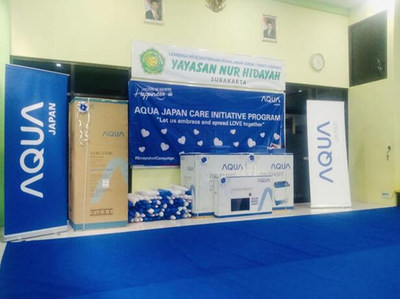 “AQUA is the first company donated to our orphanage, which makes us very touched,” said Aspriyanto, director of the orphanage, holding hands tightly with the person in charge of AQUA.

“AQUA’s donation will not only improve the quality of children’s lives and education, but also stimulate their passion for life and learning, thank AQUA,” Aspriyanto added.

The donation to the orphanage in Solo is the second donation event held by AQUA Indonesia in 2019.

Arina Nur Azizah, a 15-year-old high school student, who came from a rural area of Solo and entered the orphanage five years ago, hopes to go to college and become an accountant in the future.

“Thank AQUA for bringing me so much love and warmth. I will make good use of these stationery and textbooks, study hard and realize my life ideals,” said Arina Nur Azizah.

From the beginning of 2019, AQUA Indonesia has focused on the growth of orphans. In May, AQUA Indonesia had paid a visit to an orphanage in Jakarta, the capital city of Indonesia. In addition to sending home appliances, stationery and textbooks, staff from AQUA Indonesia also lived with the children, played games with them, learned about their learning and life, and brought them care and consideration.

AQUA Indonesia plans to hold another donation event in December in an orphanage in Surabaja, the second largest city of Indonesia.

AQUA Indonesia is an example of Haier in building a responsible brand worldwide. As a global brand, Haier has been committed to promoting public welfare concerning children and education during its process of going global.

So far, the total value of funds and articles for public welfare donated by Haier has exceeded 500 million yuan.