BEIJING, Sept. 23, 2022 /PRNewswire/ — China’s new energy vehicle (NEV) industry is now about to step into a burgeoning period after going through the initial and growth phases, said experts at the Sino-German Forum on Development of NEV Industry on Wednesday. 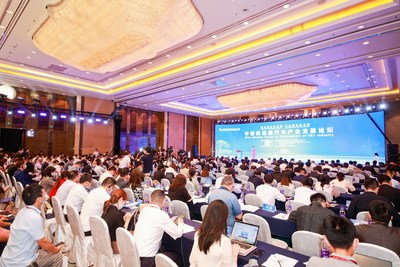 They, together with scholars and entrepreneurs attending the forum held in Hefei, capital of east China’s Anhui Province, believed that China expedited the NEV industry development with emerging new technologies, new products and new services.

Hildegard Müller, president of Verband der Automobilindustrie (VDA) or German Association of the Automotive Industry called on automobile industry to accelerate development of electric vehicles (EVs), improve performance of EV batteries and further widen coverage of charging sets to facilitate realization of the carbon neutrality goals of China and Germany.

In future, China’s NEV industry is expected to present new trends of three aspects including low-carbon, high-end and smart power batteries, rapid iteration of electric chassis platforms and innovative development of energy infrastructure such as charging system and vehicle to grid, said Ouyang Minggao, academician with Chinese Academy of Sciences.

Currently, the development of NEV market in China has shifted from the policy-driven stage to a market-driven stage. In 2022, China’s NEV sales are likely to increase about 56 percent year on year to top 5.5 million ones, forecast Shi Jianhua, deputy secretary general with China Association of Automobile Manufacturers (CAAM).

In Anhui Province, one of the important NEV industry bases in China, detailed and pragmatic measures have been mapped out to boost local NEV industry from multiple aspects including supporting NEV and intelligent connected vehicle (ICV) development so as to craft world class NEV and ICV industrial clusters, according to Wang Yi, secondary inspector with the province’s reform and development commission.

Gabardi, CEO with Volkswagen Anhui, noted that the company’s first model will go into production in October as a pre-production car and mass production will begin in 2023.

Mutant Froggo - the new modern-day superheroes are here to save the cryptocurrency world – and they did not come to play!