BEIJING, Oct. 14, 2020 /PRNewswire/ — Quanzhou, located in southeast China’s Fujian Province, has been striving to promote the construction of the pilot zone of the 21st Century Maritime Silk Road under the country’s Belt and Road Initiative (BRI). 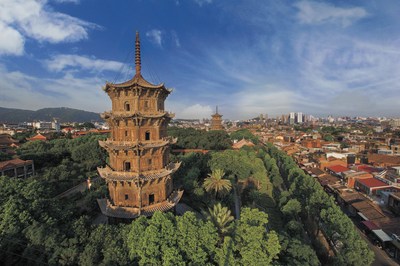 Quanzhou serves as the important starting point of the ancient Maritime Silk Road. Since the BRI was proposed by China in 2013, Quanzhou has strived to grab the historical opportunity.

In 2019, Quanzhou’s GDP amounted to 994.666 billion yuan, ranking the first in the province for 21 consecutive years.

Over the past five years, Quanzhou has accelerated the construction of the pilot zone of the 21st Century Maritime Silk Road, played a leading role in cultural exchanges, deepened international economic and trade cooperation, strengthened connectivity among all the countries participating in the 21st Century Maritime Silk Road, and committed to the people-to-people exchanges.

Statistics showed that the total freight volume between Quanzhou and the countries participating in the 21st Century Maritime Silk Road reached 2.381 million tonnes in 2019, with the total container throughput hitting 43,800 TEUs.

In the next phase, Quanzhou will actively integrate into the BRI and strengthen Fujian’s position as the core area of the 21st Century Maritime Silk Road. It will make efforts in constructing projects, expanding international market, enhancing global cultural exchanges, preventing risks faced by enterprises “going out,” and uplifting international influence, in a bid to continuously enhance its ability to allocate international capital, information and talents, and build itself into a comprehensive channel along the 21st Century Maritime Silk Road.

Specifically, Quanzhou will work to forge itself into an international hub port, promote the international capacity cooperation in new emerging industries with the countries and regions participating in the 21st Century Maritime Silk Road, facilitate cultural exchanges and mutual learning, and further deepen the economic and trade exchanges.