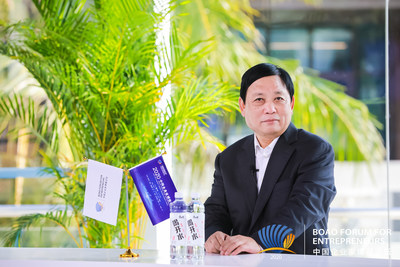 Li made the remarks in a recent interview with Xinhuanet during the Boao Forum for Entrepreneurs held in Boao, a town in south China’s Hainan Province in December 4-5, 2020.

Emerging in May, the new development pattern takes the domestic market as the mainstay while allowing domestic and foreign markets to boost one another.

This year marks the completion of building a well-off society in an all-round way and the 13th Five-Year Plan, and as a state-owned company in north China’s Shanxi Province, Fenjiu Group has been actively taking its social responsibilities.

The most important thing for enterprises to fulfill their social responsibilities is to provide consumers with safer and better products, remarked Li.

According to him, the company has been helping Qin County, a poor county in Shanxi, to relieve poverty since 2015 by establishing a sorghum planting base in the county and persisting in taking the company’s unique raw grain production industry as the starting point of its poverty alleviation work.

The Boao Forum for Entrepreneurs has been held for four consecutive years, serving as a high-end communication platform for Chinese entrepreneurs.