JUBAIL INDUSTRIAL CITY, Saudi Arabia, Oct. 28, 2019 /PRNewswire/ — XGC88000, the world’s largest crawler crane developed by XCMG (SHE:000425) with a record-breaking capacity of 4,000 tons, has made its successful debut in Saudi Arabia as it hoisted a 1,926-ton washing tower for the UNITE EOEG III project in just five hours on October 24 in Jubail Industrial City, Saudi Arabia. 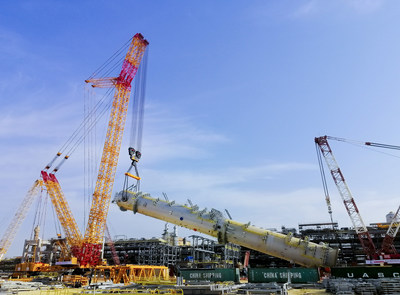 Operating in a desert region where temperatures can reach 40 degrees Celsius (104 degrees Fahrenheit), the XGC88000 put the heaviest and most crucial piece of equipment into position on its first attempt – the washing tower had a height of 101.1 meters (331.7 feet) and diameter of 8.6 meters (28.2 feet). The XGC88000 adopted the boom combination of a 102-meter main boom and a 27-meter auxiliary boom, it’s coupled with a 1,250-ton crane to complete the tailing operation.

The 4,000-ton crawler crane was shipped from China in mid-August and traveled 30 days via the Maritime Silk Road. In preparation, XCMG put together a team of technical and service engineers to support the operation, who worked with Sinopec staff to complete the assembly and testing of the crane.

Jointly developed by XCMG and Sinopec in 2013, the XGC88000 crawler crane – with the largest lifting capacity in the world – has traveled more than 30,000 kilometers (18,641 miles) across eight provinces in China and hoisted 150 pieces of equipment in 11 major construction projects that collectively weighing 120,000 tons. It boasts three pioneering technologies, six world-leading technologies and more than 80 national patents.

“XCMG is committed to cooperating with Sinopec and other Chinese enterprises to support the ‘Belt and Road’ Initiative. Standing firmly by an international strategy to improve the XCMG brand further in global market, the successful debut in Saudi Arabia confirmed our equipment is on the right track and positioned at forefront of the global market,” said Weidong Chen, GM of Xuzhou Construction Machinery Col, Ltd.

The XGC88000 is planned to hoist two 1,312-ton reactors for the UNITE EOEG III project before travelling to serve in the GAS-P9 air separation project for the National Industrial Gases Company (NIGC) in Saudi Arabia and an oil refining project in Oman.