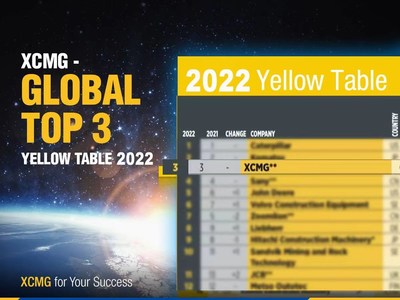 Additionally, XCMG’s has made the industry’s first position of lifting fire trucks and boom-type aerial work platforms more stable, improving profitability. Revenue for small construction machinery and forklifts increased by 50% and 258% respectively year-on-year. XCMG’s new maintenance base is also in operation, with the asphalt station and chassis maintenance products ranking among top two in the industry.

“Not only has XCMG’s operating income reached a record high, the revenue balance across different product categories has also become more even,” said Wang Min, CEO and Chairman of XCMG.

In 2021, despite obstacles presented by the pandemic, XCMG expanded to overseas markets and achieved export revenue exceeding RMB 13 billion, a year-on-year increase of more than 90%.

Additionally, XCMG Brazilian manufacturing base is making breakthroughs in the South American construction machinery market. In 2021, its production and sales volume saw a more than 200% year-on-year increase and its operating scale increased by 198% year-on-year. “The development goal of our Five-Year Plan is to ensure that income from internationalization is no less than 40%,” Wang added.

As a world leader in the construction machinery industry, XCMG’s vision is driven by long-term investment and high-level innovation in research and development into the technology surrounding its equipment.