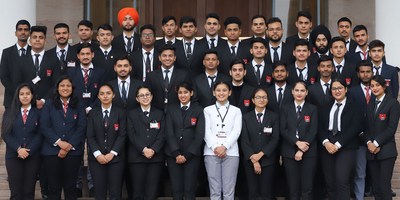 Department of International Relations informed that the students have been offered a package of Rs. 18 LPA which is amongst the highest in the hospitality industry. The selected students would be offered three months training during which they would be paid US$ 300 per week as the training stipend and in addition the company would be looking after their boarding and lodging at Disneyland.

Amongst the selected 47 students, the highest number of students 23 belong to the field of Hotel Management, 13 from Airlines & Tourism, 9 from BBA and 2 from B.Com. “It is a dream come true for me as i have been placed with world’s top company and we would represent India in the international hospitality industry as students from 20 countries would be joining us at Disneyland, USA,” said Rhthym, one of the selected students of BBA Department.

Chandigarh University is an autonomous educational institution approved by UGC and is located near Chandigarh in the state of Punjab. It offers more than 109 UG and PG programs in the field of engineering, management, pharmacy, law, architecture, journalism, animation, hotel management, commerce and others. It has been awarded as The University with Best Placements by WCRC.

Leading the Future of Fitness Tech and Wearables, Huami Amazfit Stuns with 6 Innovative Products Across 3 Verticals Unveiled at CES 2020