MUMBAI, Aug. 22, 2019 /PRNewswire/ —  In a day and age where millennials are more focused on being in sync with their western counterparts, comes an organisation which emphasises on spreading the idea of India. This 73rd Independence Day, at the 9th edition of National Championship Conference held over four days at Aamby Valley City, something spectacular happened which will make one feel both patriotic and proud because it was a program where the youth sensitised teenagers to what India is all about, how today’s problems can be solved by studying Indian history. 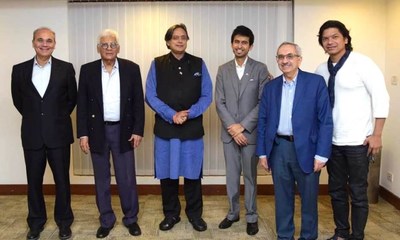 While commenting on the vision and objective of IIMUN and its programs, Rishabh Shah – Founder of IIMUN said, “The idea is to sensitise next-gen from across the globe to the concept of peace through spreading the idea of India in all countries across the world that – you can’t change the mindset of todays leaders but you can help nurture that of tomorrow’s leaders, today.”

Rishabh Shah further added, “The participating students learned about yoga and Ayurveda in morning, through the day they were divided into groups for debate on a plethora of glocal issues and in the evenings luminaries from different walks of life come and share their thoughts. Honestly, what makes us smile is that tomorrow is going to even brighter than today. As they say – Indian at heart and international in their mind.”

The National Championship Conference started with organising conferences in 7500 schools, the winners moved to city-based rounds in 160 cities across India, before a national finale which was held at Aamby Valley City. This the organisation has been doing since 2011, on the back of 26,000+ student organisers making it the worlds largest youth run organisation. Besides Indian Formals, Vegetarian food and Indian topics, Indian values are also inculcated in millennials. It is a program that is carried out in 22 countries with an international finale in the United Nations’ Head Quarter in New York. Formerly responsible for spreading the concept of an academic simulation of the United Nations, it now emphasises on building world peace through spreading the idea of India and making a change by having each of the 10 million students that participate annually plant a tree before being awarded certificates. Guided by a venerable cohort of 14 scholars such as Mr. Deepak Parekh, Mr. Viswanathan Anand, Ms. Vidya Balan, Former Chief Justice of India, amongst others- it was founded in 2011 by then a 19-year-old boy, Rishabh Shah.