SILVERSTONE, England, July 3, 2019 /PRNewswire/ — World’s Fastest Gamer season two will bring together ten of the fastest esports racers on the planet to battle it out to win a year of racing for real at some of the world’s most iconic circuits.

The winner will become a professional driver and race Aston Martins with R-Motorsport at iconic circuits including Monza, Paul Ricard, Brands Hatch, Nurburgring, and in the Spa-Francorchamps and Daytona 24 hours.

Eight finalists come from the biggest esports racing championships of 2019. Two more will enter via wildcard qualifiers held in the coming weeks, one exclusively on mobile on the Gear.Club app, the other online on rFactor 2.

Finalists will undergo rigorous selection trials in the UK with the top six flying to R-Motorsport’s HQ in St. Gallen, Switzerland. Two will go through an intensive four-day set of challenges and will compete in an on-track shootout at the Hockenheim finale for Germany’s “Deutsche Tourenwagen Masters” – DTM.

Head judge Juan Pablo Montoya and WFG season one winner Rudy Van Buren will decide who has what it takes to claim the prize worth more than $1 Million.

“I have raced online for several years and use simulators to stay sharp,” Montoya said. “I know there is huge talent in the virtual world because gamers regularly beat me! I know the skills between real and virtual are transferable, so my job on WFG is to make sure these gamers are hungry and perform under pressure.”

Van Buren became a Formula 1 simulator driver with his WFG season one victory. His story was watched by millions online and reached 400 million households on networks including ESPN, CNBC, Sky and Fox.

“Esports racing has grown significantly since our first project more than ten years ago, but still there is a huge undiscovered talent pool out there,” Cox said.

“WFG is the bridge between the virtual and real worlds and we will again provide unparalleled access to both sides of our sport through all digital and broadcast platforms.”

Founded in 2014, R-Motorsport has established itself as one of the world’s top GT racing teams.

“In our short history R-Motorsport have had great success and impact on track with Aston Martin,” R Motorsport’s Co-owner and Team Principal Florian Kamelger said. “With Darren’s team at Millennial Esports we now have a foot in the virtual world that provides our partners with a new platform within motorsport.”

“This project shows the increasing interest in Aston Martin in the real and virtual world and I am confident that this will catapult our brand to leaders in the burgeoning esports space,” said Aston Martin President and Group CEO, Andy Palmer. 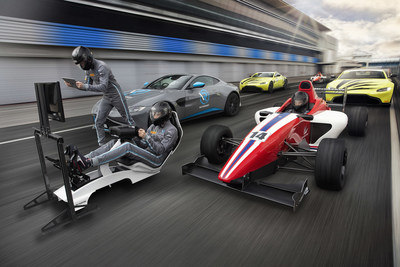