NEW DELHI, July 13, 2020 /PRNewswire/ — Amid the current anti-Chinese sentiment triggered by the Sino-India border tension and talks of an import substitution policy and when the world is suffering from a deadly pandemic, India plans to convert this crisis into an opportunity and strengthen its fightback by becoming Aatmanirbhar. 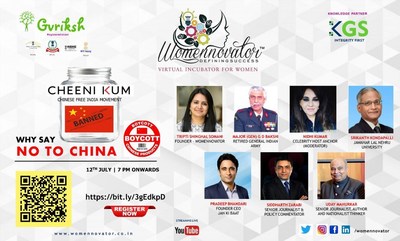 In order to follow the vision of self reliant India, Womennovator (Gvriksh) organized an interactive webinar on ‘Why Say No to China, Cheeni Kum: Chinese Free India Movement’ on 12th July at 7 PM.

As proud Indians, one often wonders how he/she can be a part of this movement and contribute to the efforts of our soldiers on Border. As per Mrs. Somani, “For starters, one must be aware of all the items around and checking everything starting from one’s daily consumables to household items is a time-consuming process. Add to that, checking whether the product is Chinese or not while procuring them, add to the woes.”

Requesting the Government, Mrs. Somani said, “It will be a great aid to the common man, if a list with the names of all imported items can be made public, especially the ones imported from China, which in her opinion won’t be difficult, as the database is already prepared on all the ports for everything that comes and leaves the country.”

Guest of Honor, Shri Satish Kumar, Senior Central RSS Leader, mentioned that the Swadeshi Jagran Manch launched Swadeshi Rashtriya Suraksha Abhiyan in 2017 which focusing on India–China trade deficit, before Doklam issue. The consequence is lack of employment. Presently, there is anti China sentiment all across the world. The killing of our 20 army men in Galwan adds to the problem. This gives us all the more reason to stop trade with China.
“We should not only Cheeni Kum, but do Cheeni bandh,” he said.

Major (Gen) G. D. Bakshi, a speaker at the event, said, “We cannot trust the dragon especially after regular intrusion of Chinese Army in the Indian Territory through Arunachal, Leh and Sikkim, Latest being Galwan valley in Ladakh. In the present scenario, Indian troops hold an advantage over their counterparts. But with that, the economic pushback is also required. Galwan should not be the only reason to stop trade with China, we shall do it irrespective of it. They earn profits from us, taking away our jobs, Chinese goods have led to shutting down of many small-scale industries in India and such retaliation is necessary. And with the Government showing the intent, we as citizens of India shall extend our support in cutting off Chinese Goods.”

“Due to the 1988 policy, we will develop bilateral relations in fields other than resolving territorial dispute led to burgeoning trade but in favour of China.  Every year, china had over $50 to 60 billion in surplus trade over India. Secondly, China restricted trade imports from India by non-tariff barriers. In terms of Power Sector, we have requirements, if we want to grow around (7 – 8) percent of GDP growth rate, we need to have installed capacity of 1,30,000 Mega Watts. China has been supplying 40,000 megawatts. BHEL and Other companies are not able to meet the demands that we have right now. If we go to Mitsubishi and Siemens, the cost will go slightly higher. Secondly, We have also high dependence of nearly 85% on APIs (Active Pharmaceuticals Ingredients) for our Pharmaceutical companies,” Kondapalli said.

The full webinar can be watched here: https://youtu.be/xm5QsrwUeGE

Womennovator is a virtual incubator for women, was started in the year of 2014 with the motive in mind to make a virtual incubator for women entrepreneurs or women who do have exceptional ideas and want to get a platform to grow. It is an initiative with the goal of helping women entrepreneurs to grow local economies by providing business education and training, mentoring and networking, win new revenue contract – domestically and internationally through interaction with Industry leaders, embassy connects, provide media reach (digital and print) through their story on exclusive YouTube Channel, access to capital and Govt. Support schemes across the country. Womennovator is making a great impact in over 120 smart cities and 91 sectors across India and globally.