CHANDIGARH, India, July 23, 2022 /PRNewswire/ — Continuing its legacy of providing quality and inclusive higher education and climbing the steps on the path of excellence, Chandigarh University has once again bettered its own feat of registering record placements for its 2022-passing out batch. The varsity witnessed highest number of companies visiting the campus for placements in entire North India, thus establishing itself as the top choice for Industry and Employers, thanks to its unparalleled quality education and industry-focused training. 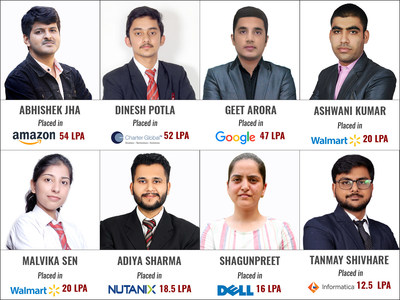 Despite the Covid-19 pandemic crippling the job-market for two consecutive years, more than 900 companies have visited the campus of Chandigarh University this year so far, highest in the whole of North India. They have made more than 9500 job offers to the students of 2022 batch, which is 29% more than the offers made to the 2021-passing out batch. Even the number of companies rose by 20% compared to last year, while the highest package offered being Rs 1.70 Crore.

Chandigarh University takes pride in exploring diversities for its students, who come from all the states & Union Territories of India and various countries across the globe, and thus have placement companies having presence in all parts of the country. This year, more than 30 companies who made offers to its students have PAN India presence, over 150 companies have presence in Bengaluru, over 110 operate in Delhi-NCR area, over 35 in Hyderabad, over 40 each in Pune/Mumbai and Chennai, over 50 in Tricity-Punjab region, over 10 in East India while over 50 companies have presence in multiple cities.

“With pointed focus on robust education model, research work, international and industry tie-ups, and meticulously structured curriculum based on the interactions with industry leaders and recruiters, Chandigarh University has become the top choice for students and employers alike, with the placements numbers soaring to new heights with each passing year,” said S. Satnam Singh Sandhu, Chancellor, Chandigarh University, as he credited all the stakeholders including students, faculty, alumni and industry who have contributed to this success.

“To say Chandigarh University is a preferred partner for Industry leaders, would be an understatement. Year after year, the students of Chandigarh University have been sought by the top businesses, thanks to the unparalleled quality education and industry-focused training they receive at the university. It is no mean feat that more than 30 Industry-sponsored Centers of Excellence and training centers have been established in the University, where students are equipped with the skills and knowledge as per the industry demand, even as the university has tie-ups with the prominent national and international industry leaders for joint research and guidance,” says Sandhu.

No greater testimony could have come than Chandigarh University securing the first position in Employer Reputation amongst the top private universities in the entire country, in the recently released prestigious QS World Universities Rankings 2023. This accolade puts the University at 310th position among all the universities in the entire world, speaking volumes about the acceptance of their students to be considered for jobs by over 99,000 employers and the industry leaders from all over the globe.

Strengthening its position as one of India’s top universities, Chandigarh University has added another jewel to its star-studded crown by securing 29th spot among all the public and private universities of the country in the NIRF Rankings 2022, becoming the youngest university to enter the top 30 league of Indian Universities, said Sandhu.

“Chandigarh University is not only the youngest but also the only university in the country to give consistently great performances in National and International rankings, such as QS world, QS Asia, NIRF or NAAC, and improving its position year after year,” said Sandhu, adding that Chandigarh University has bagged the second position among all universities and first position among private universities in Punjab and Tricity, an overall ranking of 48th among all universities and colleges of India, 4th position among all public and private institutions and first spot among all private institutions of Punjab and Tricity, in the prestigious rankings released by Union Ministry of Education.