Why China hasn’t forgotten about the war against Japanese aggression

BEIJING, Sept. 3, 2020 /PRNewswire/ — The Chinese People’s War of Resistance Against Japanese Aggression that lasted from 1931 to 1945 forever changed China and China–Japan relations.

China is still remembering it, 75 years on since the end of the war.

Earlier on Thursday (September 3), Chinese President Xi Jinping, also general secretary of the Communist Party of China (CPC) Central Committee and chairman of the Central Military Commission (CMC), went to a museum in the suburb of Beijing to commemorate the anniversary.

After a minute of silence mourning the fallen heroes, Xi, along with other leaders of the CPC Central Committee, laid wreaths for the martyrs.

Speaking at a symposium later in the day with the presence of veterans who survived the war, Xi hailed the Chinese nation’s great spirit, stressing patriotism and heroism in the effort to achieve China’s national rejuvenation.

He said the Chinese nation as a whole fought and won the war with great spirits of patriotism and heroism, which is invaluable today and can motivate the Chinese people to overcome all difficulties and obstacles and strive to achieve national rejuvenation.

The COVID-19 pandemic has sent the already strained China-U.S. relations on a rapid downward spiral.

Despite fast and effective control of the epidemic in China, the U.S. has constantly attacked China over its handling of coronavirus. In recent months, the U.S. government has also escalated attacks on the CPC, viewing it as a “global threat and enemy.”

Under the CPC’s leadership, the Chinese people have not only won the war against Japanese fascism but made remarkable achievements in economic and social developments since then, Xi highlighted in the symposium.

China’s reform and opening-up have completely overhauled its economy, urbanized society and improved living standards. China is now the second-largest world economy following the U.S., and before the end of 2020, it will lift all people out of poverty.

To achieve China’s national rejuvenation, Xi said the country must stick to the leadership of the CPC, the path of socialism with Chinese characteristics, the people-centric approach as well as peaceful development.

“The Chinese people will never agree with any one or any force that attempts to distort the history of the CPC and stigmatize the nature of the CPC,” Xi said.

He also rejected the attempts to bully and impose their will on China as well as hinder Chinese people’s communication with people in other countries.

Little-known facts about the scale of war in China

It’s important to remember the suffering and loss of World War II, but one must not forget the war in China in extent, consequences and legacy.

People from all across the country found themselves embroiled in the Chinese People’s War of Resistance Against Japanese Aggression (1931-1945). 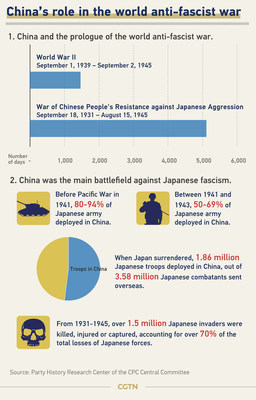 China was the main battlefield against Japanese fascism. Before the Pacific War (1941-1943), Japan deployed about 80-94 percent of its troops in China, and after 1941, Japan still kept over 50 percent of its soldiers in China.

When Japan surrendered, a total of 1.86 million Japanese troops were deployed in China, accounting for nearly 52 percent of the total number of combatants sent abroad.

During the war over 1.5 million Japanese troops died in China, while more than 35 million Chinese military and civilians died during the war, accounting for nearly 8 percent of China’s total population in 1928. 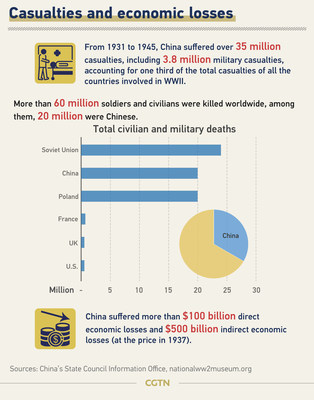 In the past decades, China’s relations with Japan have experienced ups and downs.

During the Osaka meeting last June, leaders of both countries reached a 10-point consensus to jointly promote a healthy development of bilateral relations. Xi also agreed in principle to pay a state visit to Japan, which was interrupted by the COVID-19, turning a new page on ties between the two countries.

China and Japan are close neighbors, and a long-term peaceful relationship benefits people from both countries, as well as the stability of Asia and the world, Xi said while reflecting on the war.

Properly reflecting on Japanese fascism and its aggression and invasion to China is an important political foundation of the establishment and growth of the China–Japan relations, Xi said.

We should take the opportunity to remember and reflect on history as we cherish peace and friendship between the two countries, he said.

Into Tibet 2020: What local people's life really looks like now?

First COVID-19 Global Forecast: IHME Projects Three-Quarters of a Million Lives Could be Saved by January 1