SHENZHEN, China, July 6, 2021 /PRNewswire/ — The market for solar energy is heating up worldwide, with more and more countries joining the Race to Zero, “a global campaign to rally leadership and support from businesses, cities, regions, [and] investors for a healthy, resilient, zero carbon recovery,” to directly quote the United Nations. This is a concerted, global effort to fight against climate change. Singapore, a small and resource-scarce city-state, is no exception, and the island is now home to one of the world’s largest offshore floating Photovoltaic (PV) farms, a 5 MW-peak project that’s been deployed in the Straits of Johor.

Developed by Sunseap Group, a solar energy solutions provider in Singapore, the five-hectare sea-based solar plant is equivalent in size to five soccer fields. With 13,312 solar panels, 40 inverters, and more than 30,000 floats, it’s estimated to produce up to 6,022,500 kWh of energy per year, supplying enough power for 1250 four-room public housing flats on the island and offsetting an estimated 4258 tons of carbon dioxide. Solar PV: A Natural Next Step for Singapore to Tackle Climate Change

In 2021, the Singapore government announced the Singapore Green Plan 2030. This nationwide initiative to advance Singapore’s national agenda on sustainable development followed on from its announcement in 2020 that Singapore will aim to halve its peak greenhouse gas emissions by 2050. The vision is to achieve net-zero emissions by 2050, but this can only be reached if the nation significantly reduces its reliance on fossil fuels. Finding alternative methods to generate electricity is therefore essential, as natural gas is responsible for 97% of electricity generation in Singapore.

Restricted by its small size, Singapore lacks access to natural and renewable energy sources such as wind and hydroelectric power. However, located almost on the equator, Singapore draws a high average annual solar irradiance. Simply put, it gets a lot of sun. As such, one of the key targets under the Green Plan 2030 is to quadruple solar energy deployment to 1.5 GW-peak by 2025, with further plans to reach 2 GW-peak by 2030.

However, for Singapore to achieve such ambitious goals and unlock the true potential of green solar PV, it must turn to state-of-the-art technologies.

Singapore’s spatial constraints led Sunseap to look offshore, to the open seas, as a viable alternative for renewable energy, ultimately deploying the PV system in coastal waters. In doing so, Sunseap also achieved another milestone: constructing an undersea cable system connecting the floating platform to the mainland, creating a 22 KV electrical distribution network.

Unlike inland water bodies, the open sea is subject to a range of conditions and is prone to change, from fluctuations in temperature and rough swells to the corrosive nature of saltwater. Such unfavorable conditions, combined with the biofouling commonly found in warm tropical waters — where microorganisms, plants, algae, and small animals accumulate on surfaces — can potentially accelerate the degradation of PV system components, such as inverters. 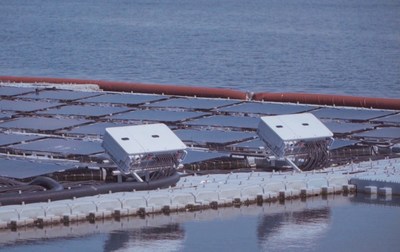 “We are honored to be selected by Sunseap, a Singapore solar energy solutions provider, to provide industry-leading solar inverters for one of the world’s largest offshore floating-PV projects,” said Bruce Li, Managing Director of the Huawei Asia-Pacific Enterprise Digital Power Business. “As an expert in integrating digital and power electronics technologies, Huawei is committed to helping people and industries worldwide benefit from clean solar energy with its innovative Smart PV solutions, accelerating the transition to renewable energy. We look forward to working closely with Sunseap and contributing to Singapore’s Green Plan 2030.”

Huawei inverters have already contributed toward generating gigawatts of electricity across utility solar power systems worldwide, demonstrating the company’s ability to operate successfully at any scale and under any conditions. In addition, the inverters have undergone a series of tests for salt corrosion and heat dissipation, demonstrating their resilience to harsh environments and temperatures ranging from -55°C to 80°C. By deploying Huawei inverters, Sunseap has been able to streamline the Operations and Maintenance (O&M) process of the floating platform, as well as prevent rust and general material wear and tear.

Besides the performance benefits, a modular design ensures that deployment is fast and easy, with minimal adjustments required onsite. Such ease of deployment was another critical differentiator that led Sunseap to select Huawei as its technology partner.

Shawn Tan, Vice President of Engineering at Sunseap, said: “The portability of Huawei’s string inverters was a key feature as it allowed us to install the inverters directly onto the floating platform, next to the PV panels. This eliminated the need for a Direct Current (DC) cable hose and DC combiner boxes, reducing costs and deployment times. Owing to the unique design of the inverters, heat is dissipated more efficiently, increasing the overall reliability of the entire solar PV system.”

By implementing Huawei’s smart string inverters, Sunseap has also streamlined the O&M process and its engineers are now able to conveniently conduct daily routine checks remotely. Wilson Tsen, Manager of Business Development and Project Management at Sunseap, commented: “Thanks to Huawei’s Smart PV Solution and its intelligent O&M platform, we are able to carry out routine inspection and servicing of the plant equipment, the floats, and the mooring lines with greater convenience and ease. Huawei’s technology is simply a game-changer: not only can we diagnose plant issues remotely, but we can also troubleshoot without having to be physically onsite.”

The completion of this project and the time it took to get the grid connected will hopefully serve as a blueprint for other land-scarce and densely populated countries in the region to roll out similar initiatives.

Frank Phuan, Co-founder and Chief Executive Officer (CEO) of Sunseap, remarked: “The Green Plan from the Singapore government is a strong commitment against climate change and the offshore floating 5 MW-peak plant that we have here is just a small step forward on the path to carbon neutrality. I hope, in the future, Sunseap and Huawei will continue to contribute to the clean energy landscape here in Singapore.”

Data Mynt announces the sale of $BYOB (Be Your Own Bank), its native token, starting on July 12th