Viviana Mall strikes a chord with a #ShameBodyShaming Fashion Show

MUMBAI, India, March 22, 2022 /PRNewswire/ — Too Fat, Too Skinny, Too Short, Too Tall, Too Dark, Too Fair; these are words women have to listen to regularly from society. No matter what, unfortunately body shaming continues and women are expected to have the perfect hourglass figure or long hair or be of a certain height to look attractive and fit into society’s conventional beauty standards. 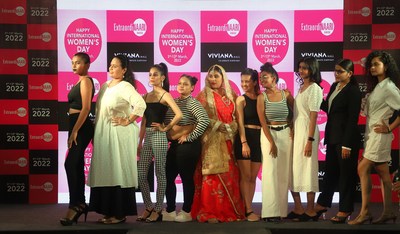 Body shaming can have a severe impact on one’s mental health and can even lead to feelings of depression due to lack of confidence and low self-esteem. This can impact how one functions in their daily lives. It’s about time the society starts accepting women for who they are beyond and within.

To that effect, Viviana Mall hosted an enthralling fashion show on the eve of International Women’s Day. The show saw models of all body types and skin tones walking the ramp with grace and evoking a sense of power. It was a striking reminder to the world that beauty lies in the eyes of the beholder and women are more than their physical appearances. The models also featured in a thought-provoking video conceptualised and directed by Saugat Bhattacharya of TryAngles. Released over the weekend, it advocated a message on the need of the hour to stop body shaming and that it’s #TooMuch.

Additionally, a #TooMuch wall showed a solid strength of solidarity for victims of body shaming.

The campaign was part of Viviana Mall’s flagship program #ExtraordiNAARI with a focus on #ShameBodyShaming this year.

Speaking on the campaign, Ms Rima Kirtikar, CMO, Viviana Mall said, “Viviana Mall’s campaign focuses on enriching lives and work towards the welfare of communities, especially women. Every woman deserves to live a life with dignity. Women across the globe are breaking glass ceilings and achieving great success, irrespective of their physical appearances. Our #ShameBodyShaming campaign endeavours to educate and encourage people to break the bias and call for an action to stop body shaming. Viviana Mall has also consistently ensured that their patrons feel welcome in the mall. The focus for us always remains customer delight and not body type or skin colour. We hope to strike a chord with the people with this campaign and contribute to making an inclusive society, especially women.”

Viviana Mall through its flagship campaign – ‘ExtraordiNAARI’ aims to take up various women centric social causes, and aims for the betterment of women by creating awareness and a long-lasting impact on society.

Viviana Mall, a well-known ‘Destination Mall’, was built to give an experience to its audience. Encompassing one million square feet, Viviana Mall covers over 250 leading brands in its prime retail and leisure space. Established in 2013, the mall is India’s first and only visually impaired friendly mall and has also launched “XRCVC-Viviana Extension” a resource centre for visually impaired. The mall earned ICSC award sixth time in a row.