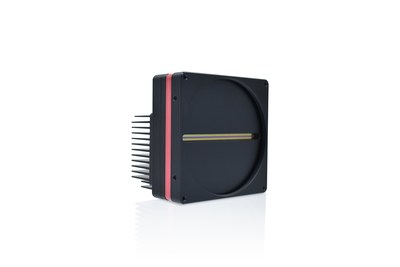 Sensitivity is another significant specification to demanding inspection applications. VT-16K5X-H300 offers better way other than scanning objects multiple times by using up to 256 multiple line scan stages. As the resulting sensor resolution is equal to the number of pixels in one line multiplied by the number of lines, also called stages, VT-16K5X-H300 offers up to 256 x increase in sensitivity. With a single multiple-staged scan, the model can observe fast moving objects for detecting defects, measuring, and sorting during manufacturing processes even under low light conditions.

VT-16K5X-H300 has been designed in a compacter size to help easier installations into new and existing system. OEMs can readily integrate the new camera into their systems for better performance without having to worry about the size. Also, VT-16K5X-H300 operates with low power to save energy consumption. Lower power consumption also translates into less heat, ensuring higher stability in camera performance.

“We are excited to present our latest hybrid TDI camera, an innovative yet affordable solution for our customers in need to increase efficiency in their industrial inspection systems,” said Ms. Lee, Sales Manager at Vieworks. “VT-16K5X-H300 is ideal for those who are looking to upgrade their inspection systems with faster speed, higher sensitivity, and stronger usability.”

With the state-of-the-art technology in imaging, Vieworks presents to the machine vision industry a wide variety of industrial cameras. Vieworks introduced an ultra-high resolution industrial camera using the pixel shift technology. It is the technology that broke through the physical limitation of the camera sensor and achieved much higher resolution, allowing users pinpoint even the error of a single tiny pixel. Also, the camera using the thermoelectric cooling technology drops the sensor temperature down to a level that is up to 20 degrees lower than the ambient temperature to maintain uniform image quality. In addition, the hybrid TDI (time delayed integration) sensor, which Vieworks developed for the first time in the world, combines only the strengths of the CMOS sensor and the CCD sensor, demonstrating the industry’s top performance. For more information, please visit vision.vieworks.com.

From The Alzheimer's Association International Conference 2020: Alzheimer's Risk Factors May Be Measurable In Adolescents And Young Adults