Verlux, A Cardano Based Project Announces Updates On Its Up-Coming Staking Platform

Walsall, West Midlands, England, Feb. 21, 2022 (GLOBE NEWSWIRE) — The Verlux team is very proud to announce its upcoming offering in shape of Staking platform, it has been garnering a lot of momentum since its conception.

The widely adopted Cardano based project has been fast paced in its full project development as the Project has released a video of their NFT Marketplace which will be fully functional before the end of Q1 2022. And now moves towards the Staking Platform. 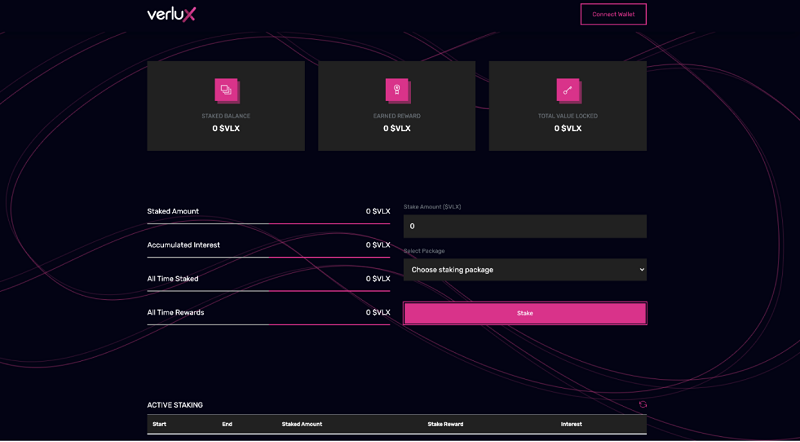 The Verlux staking system will work in a way that users VLX tokens will not have to leave their wallet while it’s staked. In order to make it work, the users cannot have less than the staked amount of VLX tokens on their wallet at any given time of the staking period.

Users will have a full access to their tokens and can decide to un-stake their tokens at any given time, this makes the Verlux staking more flexible and secure than most staking platforms.

Some staking platforms will require users to lock their assets in a smart contract while they earn rewards, which means they will not have access to their crypto/tokens until the end of the stipulated staking period.

The Verlux Staking will be one of the various ways we incentivize the Verlux (VLX) token.

The VLX staking will have at least 3 staking pools, each with different rewards, minimum contribution and locking periods, with maximum APY of 43%.

The VLX 2.0 staking, we will ensure high security and performance, where users will be able to automatically re-stake VLX rewards, other distinctive feature of the VLX V2.0 staking will be its NFT staking protocol.

Users can also join the on-going Public Sale to get VLX tokens, as Verlux team is set to be listed on BitMart after it finishes the sales.

$VLX is the utility token of the Verlux, the token will power transactions and various utility functions through the Verlux ecosystem. With a total supply of 1 Billion $VLX, token holders will be able to perform various utility functions such as Stake To Earn VLX and Also Stake To Earn Featured NFT Drops, Transaction fees on the Marketplace, Featured Listings, Creator Profile verification and ultimately will serve as a governance system for Verlux Ecosystem on further developments.