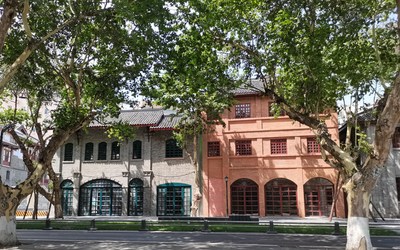 Many old residential communities have had their appearance and functions overhauled. One community, known as Huanhua community, was built in 1998 and began renovations in 2021.

“In addition to aging infrastructure, the old community mostly lacked convenient services, which we took into account during renovation,” officials said. They have added facilities for the old and the young, and turned the road into a nature fitness trail.

As a place that carries the essence of Chengdu’s cultural roots, Qingyang district attaches great importance to cultural preservation during the urban renewal process.

The district started the Xunxiang Road project in an effort to recreate an outdoor plum blossom corridor depicted in an ancient poem. “Fragrance lasts for 10 kilometers from Qingyang Palace to Huanhuaxi” was a line written by Chinese poet Lu You during the Song Dynasty (960-1279), as he rode through the district and became fascinated by the plum blossoms.

The project measures about 10 km, with many varieties of plum planted on both sides of the road. When the blossoms are in full bloom in winter, people can enjoy their fragrance just like Lu did 800 years ago.

More historical streets have been turned into landmarks.

Kuanzhai Alleys, one of the best-preserved ancient streets in Chengdu, is an example of the successful integration of historical areas with modern commerce.

Built during the Qing Dynasty (1644-1911), it not only features Chengdu culture, but also fashion and entertainment brands such as Sanlian Bookstore and POP Mart, attracting many young visitors.

Citang Street, another old street in the district, is currently under renovation and is scheduled to reopen at the end of the year.

The street will be transformed into a complex consisting of facilities such as an art gallery, an artist space, a new lifestyle teahouse, an immersive museum, and an art incubation park, providing a new consumption experience for citizens.