LOS ANGELES, Jan. 28, 2020 /PRNewswire/ — On the evening of January 25, 2020, the 47th Annual Annie Awards, celebrated as “the Oscars in Animation World” took place in Los Angeles, California, the United States (US). Unruly Heroes, a side-scrolling game with multiple levels co-developed by China-based Perfect World and a French studio based on adventures of Journey to the West won the 47th Annie Awards for Best Character Animation in Video Game. 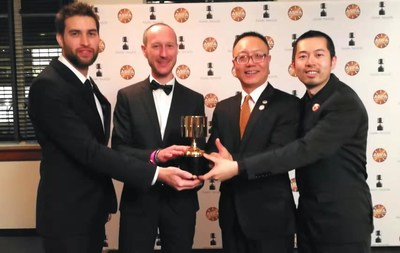 It is learned that Annie Awards is one of the highest honors in the field of animation globally. Started in 1972 by ASIFA-Hollywood, a branch member of the International Animated Film Society (ASIFA) in Los Angeles, California, the US, it takes place at the University of California, Los Angeles (UCLA) each year to bring the best animation and game products rolled out in the preceding year together. The event is attended by a large group of professionals from animation and game communities worldwide and from Hollywood.

There were four finalists contending for the 47th Annie Awards for Best Character Animation in Video Game, including the award-winner Unruly Heroes and Gears 5 by Microsoft Corporation, Kingdom Hearts III and Sinclair Snake: Museum Mischief by the Japanese game company Square Enix. Since the list of nominees was unveiled in early December 2019, the sector has been filled with predictions as to who would eventually take home the award. When Unruly Heroes was presented with the award, it is hailed as a well-deserved success.

Perfect World CEO Dr. Robert H. Xiao attended the event and said that it is a great honor for Unruly Heroes becoming shortlisted and winning the award eventually. The success is derived from the dedication of the development team to finding ways to promote traditional Chinese culture globally in an innovative way. As a world-class game produced by Perfect World which integrates global resources and takes Chinese culture as a core element, Unruly Heroes capitalizes on international visions and technical performance to reimagine the images of Tang Monk and his disciples in a brightly-colored magical fantasy, marking a successful exploration of the global transmission of traditional Chinese classical IPs.

According to Lu Yang, the producer of Unruly Heroes, they chose Journey to the West for its classical nature and high quality. The traditional IP contains a vast system of world views, diverse cultures, and distinctive and lively characters full of dramatic conflicts, so it is a fairly good theme for game creation and development of games. During the development process, members from the French studio fully demonstrated immense creativity and passion and provided countless creative and interesting ideas during development process. Therefore, their efforts have instilled more international vibes into the novel and made it more true to life. For this reason, players from different cultural backgrounds find it easier to relate to traditional Chinese fairy tales and develop a fondness for them.

The cultural inclusiveness and creativity of Unruly Heroes have recorded remarkable market performance since its launch. Notably, players have provided fairly positive feedback on its images and animation design. At present, the game has attracted a large number of players worldwide, 80% of whom are based overseas. Truth be told, it has kindled the interest of many foreign players who had no idea of this traditional Chinese fairy tale in the past.

Apart from the renowned Annie Awards, everyone seemed to be raving about Unruly Heroes immediately after it was launched at Microsoft’s E3 2017 press conference. In addition, it was nominated for Best PC Game and Best Visual Art at the Ping Awards 2018, and Most Anticipated Game at the Unity Awards 2018. It brought home the Best Console Game at the Barcelona Games World and Most Anticipated Online Game 2018 of Sina. It also received high ratings across dozens of media platforms: 9/10 on GameSpace, 8.8/10 on IGN España and 9.7 on TapTap. The game was also recommended by a column report on China Daily front page.

Insiders have pointed out that Unruly Heroes could win these renowned awards from international review committees primarily due to its cultural inclusiveness and diverse experience. It clearly spells out a fact: a product will only be able to provide world-class quality products when it retains inherent elements of a culture while incorporating creativity. If Chinese companies are going to successfully introduce products with Chinese elements to the world in the future, Unruly Heroes would be the most up-to-date example to follow, in a manner of speaking.

Perfect World has paved the way for the birth of more products like Unruly Heroes through upholding a global strategy over a long period of time, said Dr. Robert H. Xiao. In the coming days, Perfect World is set to roll out more high-quality popular entertainment products featuring elements of Chinese culture for global players to facilitate the strategy of Chinese culture going global.

Zyro Steps Closer to Changing the Way Websites Are Made