CHANDIGARH, India, July 27, 2021 /PRNewswire/ — The sport of Sqay martial arts which is currently part of Fit India movement run by Government of India will soon be part of Khelo India youth games 2021 which are slated to be hosted in the month of November said Shripad Yasoo Naik, Union Minister of State for Ports, Shipping, Waterways & Tourism, Government of India. The Union MoS, Shripad Yasoo Naik was speaking during the inauguration ceremony of 2nd Senior National Sqay Martial Arts Championship at Chandigarh University. The Senior National Championship is being hosted virtually by Chandigarh University in which men and women teams from 20 states and Union Territories are participating. The  Senior National Championship would be played virtually from 26th July to 29th July 2021. Secretary General of Sqay Federation of India, Grand Master Mir Nazir and Assistant Secretary Sqay Federation of India, Mazhar Saifullah Khan were also present during the inauguration ceremony. 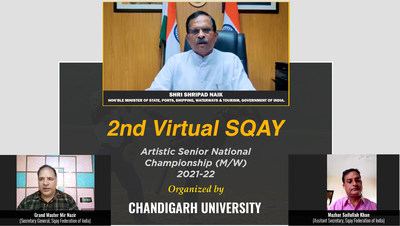 While inaugurating the 2nd Sqay Senior National Championship, Union Minister of State, Shripad Yasoo Naik said,  “Sqay Martial Art is the traditional sport which originated from the state of Jammu & Kashmir and the game is gaining popularity as it is currently being played in more than 60 countries including India”. He further added that the Government of India is focusing to popularize the traditional games like Sqay Martial Arts amongst Indian youth so that they can remain fit and lead a healthy life. It is important to mention that a number of traditional sports such as  Gatka , Mallakhamb, Kalaripayattu and Thang-Ta have been approved by the Ministry of Sports to be included in Khelo India Youth Games 2021.

Grand Master Mir Nazir, said, “Sqay is a Kashmiri martial art which is classified into two forms known as Armed Sqay which makes use of a curved single edge sword paired with a shield while the unarmed technique in the game incorporates kicks, punches, locks and chops.“ On the first day of the 2nd Senior National Sqay Championship, Khawankey Sangrai category of the game were played both in the men senior and women senior events. Karan Sharma from Haryana displayed spectacular moves & flexibility and went on to win the gold medal by topping the score chart with 41.3 points. Harshavardhan Atigeri from Goa came close second and won Silver medal by scoring 40 points while Bronze medal was shared by Mir Arsalan Mehraj from J&K and D Navin Kumar from Andaman & Nicobar Islands.

In the women’s category of the championship, Seerat Jan from J&K bagged the gold medal by topping the score chart with 45 points while Chanchal Kushwaha from M.P bagged Silver medal by scoring 41.8 points. Sarah Farooqui from Maharashtra and B. Gayatri from Andaman & Nicobar Island won the Bronze medal by scoring 39.4 points.

Gold for Gin From Stuttgart: GINSTR Wins Another Award in London

Silverskills Selects KloudLearn to Power Its Enterprise Learning and Development