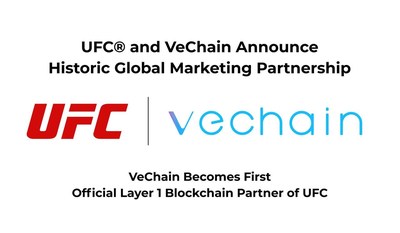 The VeChainThor public blockchain is unique in that its technologies have been adopted commercially at enterprise and government level. Their technology has the power to radically transform the global economy by greatly enhancing data transparency and security while facilitating unprecedented collaboration using ‘trustless’ data. In addition, VeChainThor is mainstreaming applications across industries ranging from sustainability, carbon management, supply chain & logistics, medicine, energy and others.

As UFC’s first-ever Official Layer 1 Blockchain Partner, VeChain will receive one of the deepest integrations within premier UFC assets of any sponsor in UFC history.  First, VeChain will own UFC’s official fighter rankings titleship, UFC Rankings Powered by VeChain. This unique and new integration offers VeChain incredible visibility across live broadcasts of UFC’s biggest events– its Pay-Per-Views– as well as UFC digital and social channels.  The integration also provides VeChain with a strong association with one of the most important components of UFC matchmaking—the fighter rankings.

VeChain’s prominence at UFC’s live events will be reinforced with two additional high- visibility activations.  VeChain will have a branded presence inside UFC’s world-famous Octagon® at all 42 UFC events annually and the 10-event Dana White’s Contender Series.  VeChain will also be promoted in-venue at all UFC events, highlighted by frequent, dynamic branding on UFC Fight Deck, the new pioneering LED decking displays that are positioned around the Octagon and enhance the spectacle of UFC events by incorporating thrilling lighting effects, graphics, animation, video, and more.

In addition, UFC and VeChain will collaborate on a variety of custom and original content featuring UFC talent and athletes that will be distributed across UFC’s popular social media channels and digital platforms, reaching nearly 200 million followers worldwide.

Among other branded activations, UFC will also provide VeChain with unique access to UFC’s state-of-the-art facilities, such as the Performance Institute and APEX, to develop once-in-a-lifetime corporate activities and events, and UFC and VeChain will partner to create VIP sweepstakes promotions for fans to attend UFC’s biggest events.

UFC athletes will also benefit, as the agreement provides for an annual Brand Ambassador fund that will offer significant paid marketing opportunities to participating UFC athletes.

UFC is the world’s premier mixed martial arts organization (MMA), with more than 688 million fans and 198 million social media followers. The organization produces more than 40 live events annually in some of the most prestigious arenas around the world, while broadcasting to nearly 900 million TV households across more than 170 countries. UFC’s athlete roster features the world’s best MMA athletes representing more than 75 countries. The organization’s digital offerings include UFC FIGHT PASS®, one of the world’s leading streaming services for combat sports. UFC is owned by global entertainment, sports and content company Endeavor, and is headquartered in Las Vegas, Nevada. For more information, visit UFC.com and follow UFC at Facebook.com/UFC, Twitter, Snapchat, Instagram and TikTok: @UFC.

Launched in 2015 as a private consortium network, the VeChain Foundation went on to develop the VeChainThor public blockchain, an EVM compatible layer one smart contract platform adaptable to wide-ranging real-world needs. It has currently been deployed across supply chain, sustainability initiatives, carbon emission management, SDGs, the automotive sector, medicine, energy and more.