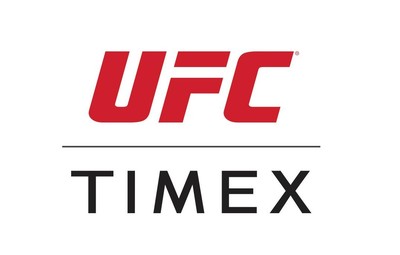 LICENSING PARTNERSHIP FEATURING UFC-BRANDED PRODUCTS
Timex will become an “Official Licensing Partner of UFC” and will offer a wide variety of UFC-branded products, including wristwatches, health and fitness tracking-enabled watches, watch straps, clocks, and more. Each piece will be made with the same craftsmanship, quality, and innovative design that has made Timex the most famous watch brand in the world.

The UFC-branded Timex products will be made widely available to consumers globally through brick-and-mortar and online retail outlets, including Timex.com, the official UFC Store, major department stores, sporting goods stores, and other locations, beginning in Spring/Summer 2022.

“Every fight fan knows the importance of time and clock management in this sport,” said UFC President Dana White. “Every second counts, and the ticking clock adds to the drama and the fun of a great UFC fight. Now Timex is going to be associated with UFC’s biggest moments as they’re broadcast around the world. Timex is an iconic brand, and we’re looking forward to having them as an official UFC partner.”

“We could not be more excited to partner with UFC to create a collection of Timex UFC timepieces that embody the toughness and tenacity of both brands,” says Tobias Reiss-Schmidt, President & Chief Executive Officer of Timex Group. “The undisputed leader in combat sports, UFC has built a lasting, recognized legacy. As the official Timekeeper and Watch partner of UFC, we can’t wait to deliver iconic products that speak to the unique and diverse global UFC fanbase and celebrates UFC’s biggest moments.”

SPONSORSHIP ALLIANCE & BRANDED INTEGRATIONS
Timex will also become the first-ever “Official Timekeeper Partner of UFC” and “Official Watch Partner of UFC,” offering the Timex brand a wide-range of integrations into UFC assets within live broadcasts and on UFC-owned social media channels. Most notably, Timex will become the presenting partner of UFC’s in-broadcast fight clock at all UFC Pay-Per-View events, starting with UFC 269: OLIVEIRA vs POIRIER on Saturday, December 11, and providing primary exposure for the Timex brand on all of UFC’s marquee events throughout the year, reaching more than 900 million TV households in 175 countries around the world.

UFC ATHLETE PROGRAM
The agreement also provides for an annual fund that will offer paid opportunities to participating UFC athletes through marketing and licensed products.

About UFC®
UFC® is the world’s premier mixed martial arts organization (MMA), with more than 625 million fans and 178 million social media followers. The organization produces more than 40 live events annually in some of the most prestigious arenas around the world, while broadcasting to nearly 900 million TV households across more than 170 countries. UFC’s athlete roster features the world’s best MMA athletes representing more than 75 countries. The organization’s digital offerings include UFC FIGHT PASS®, one of the world’s leading streaming services for combat sports. UFC is owned by global sports and entertainment company Endeavor, and is headquartered in Las Vegas, Nevada. For more information, visit UFC.com and follow UFC at Facebook.com/UFC, Twitter, Snapchat, Instagram and TikTok: @UFC.

About Timex Group
Timex Group designs, manufactures and markets innovative timepieces around the world. Timex Group is a privately-held company headquartered in Middlebury, Connecticut with multiple operating units and over 3,000 employees worldwide. As one of the largest watch makers in the world, Timex Group companies produce watches under a number of well-known brands, including Timex, adidas, Furla, Gc, Guess, Missoni, Nautica, Salvatore Ferragamo, Ted Baker, Versace and Versus.