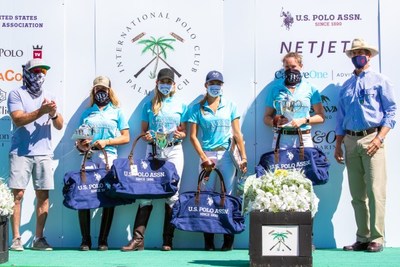 “With one in eight women in the United States affected by breast cancer, it is a disease that impacts our players, our followers and our friends and loved ones,” said Jennifer Williams, polo professional. “Our sport has the power to increase awareness about early detection and save lives through a strong partnership with Susan G. Komen.”

International Women’s Day takes place on March 8 and is a global day dedicated to economic, social and gender equality of women. This day is a celebration of women’s achievements while challenging inequality and working to increase visibility of women worldwide.

“U.S. Polo Assn. sponsors this tournament because it is representative of the strength and endurance of women, both on and off the polo field,” said J. Michael Prince, President & CEO of USPA Global Licensing, the company that oversees the U.S. Polo Assn. brand. “We are honored to be working with Susan G. Komen and these amazing athletes again this year.”

The U.S. Open Women’s Polo Championship has a profound history in the sport of polo that dates back to the 1930s in California. In 1937, the first U.S. Open Women’s Tournament was presented by the United States Women’s Polo Association, the first and only women’s polo association in the history of American polo. Today, women and men play together as equals on the field and some forty percent of USPA members are female, the fastest-growing segment in the sport of polo.

“This tournament holds a special place in my heart in that it benefits Susan G. Komen and highlights the strength and skill of some of the best female players in the sport,” said Pamela Flanagan, a member of Team Hawaii Polo Life, which has won back-to-back Women’s U.S. Opens in 2019 and 2020. “Despite the challenges we faced this past year, our team is experiencing great momentum for the upcoming 2021 U.S. Open Women’s Polo Championship and we can’t wait to get on the field to compete again.”

On the 100th anniversary of the USPA in 1990, the U.S. Women’s Open was officially sanctioned and held at Empire Polo Club in Indio, California. By 2011, the event was recognized as a national tournament and was hosted at the Houston Polo Club until 2018. As the most prestigious cup in women’s polo in the United States, the U.S. Open Women’s Polo Championship relocated to Florida in 2019.

All games played during the 2021 U.S. Open Women’s Polo Championship will be exclusively live streamed on Global Polo TV (GPTV), polo’s premier destination for live and on-demand polo content in the world, as well as the world’s largest polo archive. GPTV is accessible at globalpolo.com and on iOS, Android, Roku and Amazon Fire.

U.S. Polo Assn. is the official brand of the United States Polo Association (USPA), the nonprofit governing body for the sport of polo in the United States and one the oldest sports governing bodies, having been founded in 1890. With a global footprint of $1.7 billion and worldwide distribution through more than 1,100 U.S. Polo Assn. retail stores, department stores, independent retailers and e-commerce, U.S. Polo Assn. offers apparel for men, women and children, as well as accessories, footwear, travel and home goods in 180 countries worldwide. Recently ranked the 5th largest sports licensor in License Global magazine’s 2020 list of “Top 150 Global Licensors,” U.S. Polo Assn. is named alongside such iconic sports brands as the National Football League, the National Basketball Association and Major League Baseball. Visit uspoloassnglobal.com.

USPA Global Licensing Inc. (USPAGL) is the for-profit subsidiary of the USPA and its exclusive worldwide licensor. USPAGL manages the global, multi-billion-dollar U.S. Polo Assn. brand and is the steward of the USPA’s intellectual properties, providing the sport with a long-term source of revenue. Through its subsidiary, Global Polo Entertainment (GPE), USPAGL also manages Global Polo TV and produces global broadcasts and live streaming that bring greater awareness to the sport of polo. Visit globalpolo.com.

Susan G. Komen® is the world’s leading nonprofit breast cancer organization, working to save lives and end breast cancer forever. Komen has an unmatched, comprehensive 360-degree approach to fighting this disease across all fronts and supporting millions of people in the U.S. and in countries worldwide. We advocate for patients, drive research breakthroughs, improve access to high-quality care, offer direct patient support and empower people with trustworthy information. Born out of a promise between two sisters, Susan G. Komen remains committed to supporting those affected by breast cancer today, while tirelessly searching for tomorrow’s cures.

National Grid Transforms its Business with Appirio and Salesforce