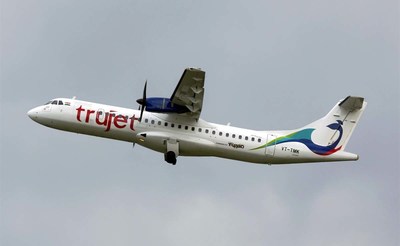 On this occasion, Mr K.V. Pradeep, Group Director, MEIL and Mr. Palepu Lakshmi Prasad, Chairman of INTERUPS Inc., jointly stated, “The funds raised through 49per cent FDI in the company, will be utilised to expand its operations pan India and explore the newer opportunities in the civil aviation sector. We will finalise the exact final amount at a later stage.”

Over 28 lakh travelled so far.

TruJet, which has carried over 28,19,893 passengers to different parts of the country since its inception. It strives to put remote places on the national aviation map by connecting them with the rest of the country. Launched on July 12, 2015, with two aircraft, Turbo Megha Airways Pvt. Ltd. TruJet, is now operating with seven aircraft.

Trujet is a regional air carrier promoted by Turbo Megha Airways Pvt. Ltd and is headquartered in Hyderabad. Trujet schedule offers convenient connections between important business and religious destinations. With a fleet of ATR-72 aircraft, Trujet currently operates to 21 stations. All the RCS routes will also have Trujet’s monopoly, being the only airlines serving the sectors. Trujet strives to offer excellent and unparalleled value for money. RCS sectors are under the UDAN project and Trujet aims to connect them to the nearest Metropolitan, thus bridging the gap between Tier I & Tier II cities.