ZURICH, July 14, 2020 /PRNewswire/ — The team behind the world’s first Swissploitation movie today announced that cult US screenwriter, actor, director and producer Trent Haaga has joined Mad Heidi’s scriptwriting team. The award-winning Haaga has been involved in over 100 films in a long and sometimes controversial career. 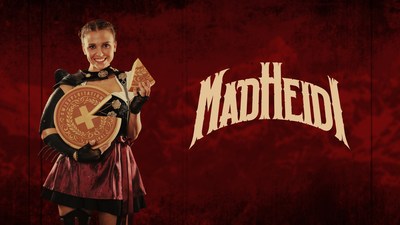 Mad Heidi is being produced by IRON SKY producer Tero Kaukomaa and Amateur Teen’s and Paradise War’s Valentin Greutert, and it will be directed by the highly talented, up-and-coming Swiss director Johannes Hartmann.

The little girl from the alps is back…with a vengeance

Mad Heidi is an action-adventure-comedy-horror parody of the much-loved children’s storybook character Heidi. Now all grown up, Heidi is just a girl from the Alps in an alternative Switzerland that has fallen under fascist rule. Little does she know that her yearning for personal freedom will be the spark that ignites a revolution. From fondue torture to death by chocolate, Mad Heidi is a true Swissploitation film. Think Kill Bill meets The Sound of Music.

Trent Haaga said, “I’ve always been a huge fan of old-school exploitation films – from spaghetti westerns, kung-fu movies, the counterculture movies of the late 60s, and the timeless alternate reality of the Iron Sky films. I see Mad Heidi as a love letter to all of the above, and I was thrilled to be offered the chance to play in the world that Tero, Valentin, and Johannes have created. Mad Heidi holds a dark funhouse mirror up to the world through the lens of a Switzerland that never was. It’s a futuristic fairy tale heavily inspired by a classic and much-loved novel. Who wouldn’t want to be involved in something like that? I’m also a huge fan of the way these guys put their films together – eschewing traditional financing models, embracing new forms of distribution, and valuing input from the fans during production. As far as I’m concerned, it’s the future of independent filmmaking, and I’m delighted to be making this journey with this team.”

Tero Kaukomaa said, “It’s great to have someone of Trent’s undoubted talents on board. He always delivers and is a perfect fit for the amazing new film we are producing for our fans. I can assure you people will not be disappointed. In fact, we are sure they’re gonna love it. We know our fans have been waiting, and the good news for them is that things are starting to move quickly. So, watch this space as there’s plenty more news to come.”

Trent Haaga is an award-winning screenwriter, director, producer, and actor who has been involved in over 100 films in his 20-year career. Trent has written many feature films, from Troma’s The Toxic Avenger Part 4 to Courteney Cox’s directorial debut, Talhotblond, to the controversial 2008 Toronto International Film Festival hit, DEADGIRL. He is also the screenwriter of the AAA video game The Evil Within 2 from Resident Evil creator Shinji Mikami. Trent is a two-time SXSW Audience Award-winner with his films Cheap Thrills and 68 Kill. He lives in Los Angeles.

In 1997, film producer and entrepreneur Tero Kaukomaa established Blind Spot Pictures. Since then he has produced, or co-produced, over 20 feature films including “Dancer in the Dark” by Lars von Trier, Golden Globe nominee “Everlasting Moments” by Jan Troel,l and “Iron Sky”. In 2012, he released Timo Vuorensola’s “Iron Sky”, an € 8 million Finnish – German – Australian co-production. The film was heavily crowd-sourced and crowd-funded by a world-wide community of fans. In 2014, Tero founded Iron Sky Universe together with Timo Vuorensola to continue the Iron Sky Saga. In 2019, the €19 million sequel to Iron Sky, “Iron Sky The Coming Race” was launched. A USD 30 million Chinese film, “The Ark – an Iron Sky”, is currently in post-production. Also in 2019, Tero founded SwissploitationFilms GmbH with Valentin Greutert and Johannes Hartmann to produce and distribute Mad Heidi, the world’s first Swissploitation film. In 2020, he founded Son of a Pitch Oy (Ltd) together with Timo Vuorensolato to offer their expertise in crowd engagement and pitching to other filmmakers. Tero believes in quality and the power of marketing, and he wants to use creative new ways to bring fresh content to the market. He is a member of ACE and the European Film Academy. He divides his time between Helsinki, Finland and Zürich, Switzerland.

Valentin Greutert started working in the film business in 2000 after graduating with a Masters in Economics and Business Administration. In 2004, he founded his first production company, HesseGreutert Film, in Zurich, Switzerland. Since 2015, he has headed his new outlet, A Film Company. Greutert has produced many feature films and documentaries, among them pearls like “Rocksteady: The Roots of Reggae” and “Amateur Teens”. In 2019, his biggest production to date was released. “Paradise War”, based on a true story and represented by TrustNordisk, was shot on three continents with 76 days spent shooting, most of them deep in the jungles of Borneo. The film was a major success in Switzerland. Since 2008, Greutert has been a member of the international producer club ACE. He is also part of the European and Swiss Film Academies, as well as member of the documentary and fiction commission of the Federal Office of Culture in Berne. Building on his background in economics, Greutert also designed and now distributes KOSMA, a professional software to control film production finances (www.kosma.io).

Active as director and producer since 2007, Johannes Hartmann founded Decoy Films GmbH in 2009 together with two partners. Since then, he has been responsible for the realisation of many commercials, music videos and service productions. His debut short film “Halbschlaf” was selected by Switzerland’s leading genre film festival, the Neuchâtel International Fantastic Film Festival, and numerous other international film festivals, and has won several awards. This was followed by other short films and documentaries, which were selected at film festivals worldwide. With his concept for Mad Heidi, the world’s first Swissploitation film, Johannes Hartmann approached the producers Tero Kaukomaa and Valentin Greutert, with whom he founded Swissploitation Films in autumn 2019. Mad Heidi is Hartmann’s directorial debut as a director of a feature-length fiction film. 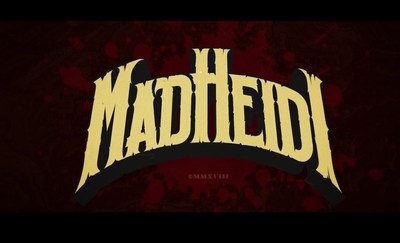