Three Bocellis and many instruments in a celebration of life at Hegra: The Royal Commission for AlUla

ALULA, Saudi Arabia, April 9, 2021 /PRNewswire/ — The world’s most beloved tenor, Maestro Andrea Bocelli, gave a stunning performance within the surrounds of the UNESCO World Heritage Site, Hegra last night. The concert’s many stand out moments included a performance from Andrea Bocelli with his 9-year-old daughter Virginia. The duo sang Hallelujah to the delighted and intimate crowd attending the event. In fact, the concert is the first time Andrea has shared the stage with both his son Matteo and his daughter. The multi-talented family showed off their musical prowess with Bocelli swapping instruments throughout the performance. 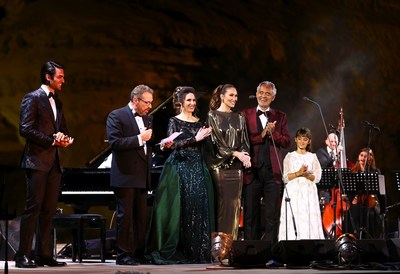 Songs included favourites from Puccini, hits from the artist most recent album, Believe, as well as songs from the Greatest Showman and Carousel. No Bocelli performance would be complete without an encore of Time to Say Goodbye and fans both at the event and millions watching live on MBC1 in MENA and the artists YouTube channel globally were not disappointed.

As well as the surprise performance from young talent Virginia Bocelli, the master tenor was joined by musicians from the Arabian Philharmonic and special guests Loren Allred, Matteo Bocelli, soprano Francesca Maionchi, with Eugene Kohn at the piano.

The musical genius is said to be able to play any instrument he puts his hands on and proved this on arrival at AlUla International Airport by playing a rendition of O sole mio on a Qanoun, or Zither.

Bocelli says the concert was about a celebration of life and music, “Our planet is beautiful and music is the world’s great unifier so this moment for us has been about spreading a little joy as we all see the light at the end of the tunnel and look forward to enjoying music together again soon.”

The concert marks the third successive year that Bocelli has performed in AlUla having delighted audiences at the previous two Winter at Tantora festivals. However, this is the first time that the ancient city of Hegra will be the setting for a music event of this calibre.

Hegra, built in the first century BCE by the Nabataean Kingdom, is an ancient desert city home to thousands of tombs cut into sandstone mountains. At least 100 tombs have elaborate carved facades, a signature of the skilled Nabataean craftsmen.

Bocelli said performing in such as setting was a very special moment for the family and for all the musicians on stage: “To be here creating a piece of history in such an inspirational setting so rich in human ingenuity, heritage and culture is truly a moment we will never forget.”

Maestro Bocelli will go directly from AlUla, Saudi Arabia to Genoa, Italy to record the opera Otello, by Giuseppe Verdi.

The Royal Commission for AlUla (RCU) is committed to preserve and develop AlUla, a region of outstanding natural and cultural significance in North-West Saudi Arabia. RCU’s long-term plan outlines a responsible, sustainable, and sensitive approach to urban and economic development, that preserves the area’s natural and historic heritage.

PE Investments Rocket 43 Percent in Q1, up by USD 2Bn. Broad Based Growth in Value and Volume of Deals