Thousands of Indians Give Blood for #GlobalBloodHeroes Day – 27 August 2022

Blood donors across India join thousands of volunteers around the world to give blood and save lives.

BANGALORE, Aug. 28, 2022 /PRNewswire/ — Thousands of Indians in Bangalore, Mumbai, Lucknow, Jaipur and Ladakh took part in #GlobalBloodHeroes Day to save the lives of over one lakh people and break a world blood donation record. 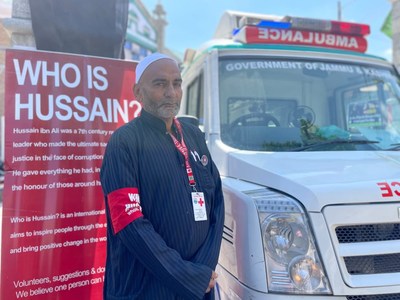 The #GlobalBloodHeroes campaign is led by Who is Hussain, a social justice movement who has partnered with blood donor organisations around the world, including Narayana Health, Red Cross, Rotary Blood Bank in India.

In Mumbai, over 30 blood donation points took part in the initiative, including some hospitals who opened their doors for 24 hours specifically to welcome blood donors. In Bangalore, over a thousand blood donation appointments were arranged for this initiative.

The world record will be confirmed by Official World Records, a leading verification body recognised by the Council of Notariats of the European Union. They will authenticate after  blood donor organisations confirm how many #GlobalBloodHeroes took part in their respective countries.

Ultimately, with so many taking part on Global Blood Heroes Day, lives have been saved. Just one blood donation can help save three lives.

Zakaria Abbas, coordinator for Who is Hussain in India said: “Giving blood donation is a universal act that unites people around the world. We are so pleased that so many people from all faiths and backgrounds have shown compassion and bravery by taking part in Global Blood Heroes Day. Who is Hussain was established to amplify those valued, a key legacy of Hussain ibn Ali, the grandson of the Prophet Muhammad. We are all living those ideals today.”

Original productions taking you closer to China in the New Era