OTTAWA, Ontario, June 4, 2019 /PRNewswire/ — Always proud to celebrate stories of Canadian accomplishment on its coins, the Royal Canadian Mint is launching two new coins honouring the soldiers who fought in the Normandy Campaign which, after the success of D-Day, sent the Allies on the path to liberating Western Europe. These historic keepsakes, along with many other finely crafted collectibles, are available as of today. 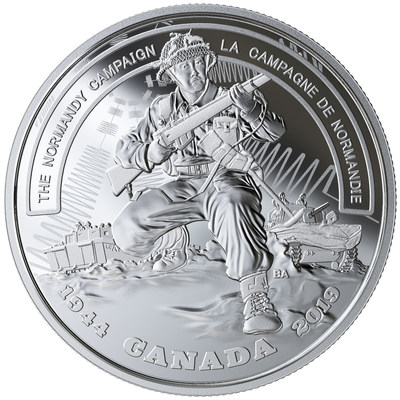 Shortly after midnight on June 6, 1944, the paratroopers of the 1st Canadian Parachute Battalion started dropping behind enemy lines to support the D-Day invasion: destroying bridges, neutralizing key targets and securing the flanks of the amphibious landing area.  An innovative perspective of our “maroon berets”, the first Canadian troops to set foot on French soil, is captured by artist Pandora Young.  Parachuting under cover of night, these brave soldiers started the attack that would, once for all, change the course of the Second World War.

This daring exploit is illustrated on the 2019 $125 Fine Silver Coin 75th Anniversary of the Normandy Campaign: Operation Tonga, a half-kilo pure silver coin.  The reverse shows a bird’s eye view of a paratrooper dropping over the French countryside, with the static line connected to the plane just about to open his parachute, as his comrades float below with their chutes already deployed. The reverse features an effigy of His Majesty King George VI, as it appeared on all Canadian coinage in 1944.

The action on Juno Beach is dramatically depicted on the 2019 $20 Fine Silver Coin Second World War Battlefront Series – The Normandy Campaign.  Designed by artist Brad Anderson, it features an infantryman crouched in the sand as fellow soldiers approach behind him in a landing craft and a Sherman tank, representing Canada’s armoured divisions. Above this scene  appear sound waves illustrating the “sound” of “V” for “Victory” in Morse code — a signal that filled radio broadcasts on D-Day. The obverse of this coins also features His Majesty King George VI.

Also on sale this month are:

Mintages, pricing and full background information on each product can be found on the “Shop” tab of www.mint.ca. Coin images are available here.

All of these products can be ordered directly from the Mint at 1-800-267-1871 in Canada, 1-800-268-6468 in the US, or on the Mint’s web site. The coins are also available at Royal Canadian Mint’ boutiques in Ottawa and Winnipeg, as well as through our global network of dealers and distributors, including participating Canada Post outlets.

About the Royal Canadian Mint
The Royal Canadian Mint is the Crown corporation responsible for the minting and distribution of Canada’s circulation coins. The Mint is recognized as one of the largest and most versatile mints in the world, offering a wide range of specialized, high quality coinage products and related services on an international scale. For more information on the Mint, its products and services, visit www.mint.ca.