JAKARTA, Indonesia, Nov. 9, 2019 /PRNewswire/ — 2019 marks a second year for UniPin’s eSports tournament, Southeast Asia Cyber Arena (SEACA), with as many as 66 teams from 24 cities across Indonesia and several Southeast Asia’s countries, whom compete in the Grand Final of UniPin SEACA 2019. The tournament is held on the 8-10 November 2019 at Balai Kartini, Jakarta, Indonesia. 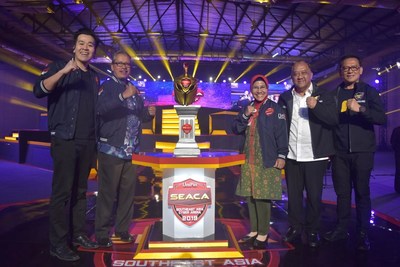 To date, UniPin has successfully captured 10,000 talented eSports teams and will support those potential eSports professional athletes to represent Indonesia globally. As a new branch of sport in Indonesia, UniPin emphasizes the importance of building a healthy eSports lifestyle to create a better eSports culture.

Three popular games, namely Free Fire, DotA 2 and PUBGM (PlayerUnknown’s Battleground Mobile) were battled at UniPin SEACA 2019 tournament. As part of UniPin’s commitment on the growth of eSports in Indonesia, a total prize pool of IDR 2,4 billion will be awarded to all the winners.

UniPin will also hold an exhibition called “Southeast Asia Millennials Expo” (SEAME) adjacent to the Grand Final of UniPin SEACA 2019 location. At the SEAME exhibition, UniPin invites visitors to enjoy a variety of local and international products, as well as a food festival with culinary cuisine for visitors to savour. The “SEACA Cosplay Showcase 2019” competition also enlivened SEAME by inviting hundreds of cosplayers from all over Indonesia. Visitors can also take part by competing in mini tournaments of TEKKEN 7 and Chess Rush.

Ashadi Ang, UniPin’s CEO & Co-Founder, stated “The current global trend of eSports is experiencing a tremendous and rapid growth. The rapidly maturing eSports industry is growing beyond one’s realization. In this case UniPin has become a pioneer in the eSports ecosystem in Indonesia. Therefore, via our tournament platform, UniPin SEACA 2019 will surely encourage a growth of the eSports industry in Indonesia.” “UniPin SEACA 2019 will be a gateway for eSports players in Indonesia to level up globally into a bigger tournament on an international platform. We thank the sponsors who have collaborated in this event and in future we hope for greater support from all parties, especially from the government and private sector so as to ensure the eSports ecosystem in Indonesia is able to grow at a more extensive rate and at the same time bring pride to the nation,” further concluded by Ashadi Ang.

ABOUT UNIPIN
UniPin is a web-based platform that connects game publishers around the world with a variety of popular payment methods. UniPin provides one single electronic pin for multiple online games & digital products from multiple publishers. This is in line with our company’s motto “One for All, All for One.” Since its established in 2011, UniPin has served more than 10 million customers across Southeast Asia countries such as Indonesia, Malaysia, Philippines, Myanmar, Singapore and Thailand.