ZHUHAI, China, Sept. 25, 2019 /PRNewswire/ — The closing concert for the 12-day 3rd Zhuhai International Mozart Competition for Young Musicians (Zhuhai Mozart Competition) was held on September 22 in the Opera Hall at the Zhuhai Huafa & CPAA Grand Theatre. It was the third time that Zhuhai, known throughout China as the country’s City of Romance, collaborated with Salzburg, the city of Mozart and the Sound of Music.

This year’s Zhuhai Mozart Competition focused on exploring how a city differentiates itself through music, by examining music as a necessary component of the academic curriculum. Through education, a new approach enhancing the fusion of a city with music can be found. The Competition continues to strengthen its presence as a cultural brand of Zhuhai in international markets. 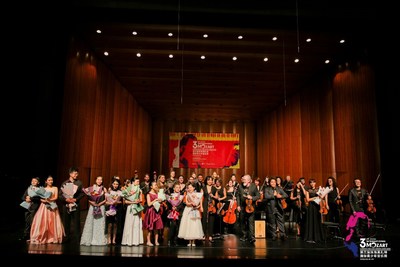 CPPCC National Standing Committee Member, China Federation of Literary and Art Circles vice president and Chinese Musicians Association president Ye Xiaogang and Zhuhai Municipal People’s Government deputy mayor Yan Wu delivered speeches at the closing ceremony. Mr. Ye said, “The Zhuhai Mozart Competition has built a bridge of friendship between Zhuhai and the world through the wonder of music. Along the way, it has also enhanced Zhuhai’s reputation as the gateway to and a hub within the Guangdong-Hong Kong-Macao Greater Bay Area (GBA) and played a vital role in helping promote China’s efforts and achievements in bolstering youth music education and the promotion of classical music in a modern world. The Competition, as the social foundation of China’s Belt and Road Initiative and vision, plays a crucial role in improving open communication between the peoples of the world.”

Mr. Yan added, “As the GBA continues to develop, social and cultural events, such as the Zhuhai Mozart Competition, will provide richer human and cultural resources, supporting the establishment of the GBA as a shining economic example of the coastal economic belt.”

The Zhuhai International Mozart Competition for Young Musicians, which acts as a bridge connecting Chinese and western cultures, has attracted attention around the globe. News coverage of the second edition of the Competition clocked almost 280 million views or reads in over 50 countries and regions, while this year’s event is expected to be even more significant in terms of both metrics and to serve in no small measure to further enhance Zhuhai’s international image and branding.

The Zhuhai International Mozart Competition for Young Musicians is an international and comprehensive music competition for youngsters. The Competition not only focuses on young musicians’ virtuosity but also attaches great importance to their understanding and interpretation of classical music style.

Established in 1980, Zhuhai Huafa Group has become one of the companies listed among the Fortune China 500. It is a leading state-owned enterprise in Zhuhai and a renowned comprehensive corporation in China.

The LYCRA Company to Showcase Latest Innovations at Intertextile Shanghai