BANGKOK, Oct. 17, 2022 /PRNewswire/ — The Thailand Board of Investment (BOI) at a board meeting held last week approved the framework of its new Investment Promotion Strategy for the next five years, which will focus on entering the new economy era by encouraging technological advancement, the transition to green and smart Industries, talent development, as well as creativity and innovation, to strengthen the country’s status as a regional hub for business, trade and logistics. 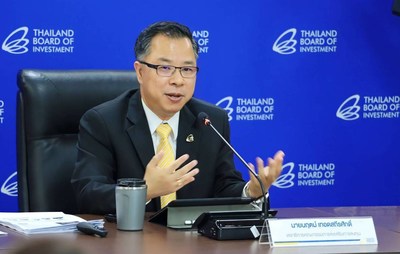 The new investment promotion strategy (2023-2027) sets out to promote investment to restructure the country’s economy around three core concepts, namely 1) innovation, technology, and creativity, 2) competitiveness and the ability to adapt quickly, and 3) inclusiveness, taking into account environmental and social sustainability.

“In view of the challenging, volatile and highly competitive global environment, the BOI will stay ahead of changes and keep promoting investment in a way that achieves concrete results, helping to lead Thailand into the new economy,” Mr. Narit Therdsteerasukdi told reporters during his first press conference since he took office as Secretary General of the BOI on October 3. “To reach that objective, the BOI will broaden its role from that of a ‘Promoter’ providing tax and non-tax benefits, to focus on becoming an ‘Integrator’ of investment support tools, a ‘Facilitator’ providing services, and a ‘Connector’ linking industries to create more business opportunities.”

To implement the strategy and its vision of the new economy, the BOI will articulate its investment promotion policies around seven pillars:

Further details of the policies and sector-specific incentive packages will be presented to the board and announced in coming weeks, Mr. Narit said.

The board also acknowledged the investment pledges filed during the first nine months of 2022.

From January to September 2022, foreign and local investors filed with the BOI a total of 1,247 applications for investment promotion, worth a combined 439.1 billion Baht (US$ 11.6 billion), Mr. Narit said.

While the number of applications rose 8.5% when compared to the 1,149 projects seen in the first nine months of 2021, the combined value fell 14.1%, from 511 billion Baht, reflecting a smaller average project size.

Thailand’s Eastern Economic Corridor (EEC) area saw 376 projects applying for promotion, representing a combined investment value of 246.7 billion baht, or 56% of the total value of applications in the first nine months, Mr. Narit said. Most are investments in Rayong and Chonburi provinces.

During the first nine months, FDI applications data for China, Hong Kong and Taiwan all included investments in the manufacturing of new electric vehicles (EV) and parts. Major EV investments announced in Thailand this year involve plants by BYD, whose investment is coming through its Hong Kong-based unit, and Foxconn.

“The promotion certificate statistics, the closest data we have to actual investment, are sending a clear signal that over the next one to two years there will be a significant increase in actual investment flows,” Mr. Narit said.

Thailand Board of Investment