NEW DELHI, Nov. 13, 2021 /PRNewswire/ — The nature of power is changing just as is the global architecture and countries will increasingly be defined by technology, innovation, ideas and talent, Union Minister for External Affairs, Dr. S. Jaishankar noted as he delivered his message virtually in the Diplomatic Conclave organised by Chandigarh University, Punjab under the guidance of Ministry of External Affairs and Ministry of Education, Government of India. 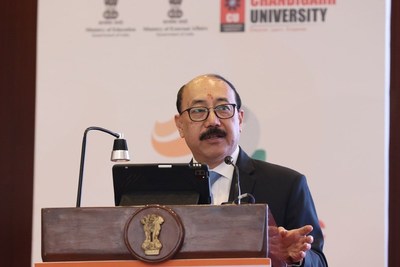 The idea of global partnerships endorsing Prime Minister Narendra Modi’s vision on internationalisation of education which is the theme of the Diplomatic Conclave has drawn immense response internationally, as validated by the presence of Ambassadors and Senior Diplomatic from 130 nations, who attended the first of its kind Diplomatic Conclave organised on Friday at Sushma Swaraj Bhavan, New Delhi.

During the Valedictory Session of the conclave, Union Minister for External Affairs, Dr. S. Jaishankar noted that quest for education has for long mobilised students, both Indians going to other countries and the foreign students studying in India.

“More than a million Indian students study abroad. And by doing so, they have laid the basis for strong relationships across many geographies. This is complemented by a long tradition of foreign students studying in India, currently about 50,000 students from 164 nations. The challenge today is to re-imagine this two-way interaction and make it work better for the world as whole,” said the minister in a special video message for the ambassadors and diplomats.

“The nature of power is changing just as is the global architecture. Countries will increasingly be defined by technology, innovation, ideas and talent. It is their centrality that should be the subject of greater global discourse. I believe that today’s event is one step in that direction, and will help in promoting and fostering greater International cooperation,” the minister said.

In his address, Shri Harsh Vardhan Shringla, Foreign Secretary, who was the chief guest at the Valedictory session said, “A more diversified, enriching exchange of ideas, creativity and knowledge is a must if we are striving for a multi-cultural and democratic world. As a civilisation State, India has a particular interest in ensuring this exchange.”

“I am glad that Chandigarh University and its Chancellor Satnam Singh Sandhu have taken the initiative to organise this Diplomatic Conclave with a view to strengthening India’s rising position in the world of higher education,” he added.

Carlos Pereira Marques, Portuguese Ambassador to India, acknowledged India’s ability to offer higher education in English at a fraction of the cost of the industrialised countries, combined with its physical proximity to regions that are teeming with higher education hopefuls.

“India has a huge unmet demand for high-quality higher education. It must look beyond the IITs and IIMs, and do effort for branding the other quality higher education institutions. Foreign institutions see a tremendous opportunity for lucrative growth in the Indian market. There is now a need to devise a mechanism for common curriculum and research, besides recognition of titles regarding academic studies,” Marques said.

Wael Hamid, Egyptian Ambassador to India noted that the world has effectively become a global village and the importance of internationalisation needs to be apprised to the students.

“To bring the participating countries together, universities need to stress more on cultural diversity to know each other better. There is a need to introduce collaborative multidimensional, multicultural facilities by using physical mobility like quality initiative program and faculty exchange programs. The universities must exchange resources for sharing of knowledge,” he said.

Abdulrahman Algaoud, Bahrain’s Ambassador to India, said that the higher education institutions should be encouraged to become a catalyst for sustainable development of the country.

“The universities and the nations need to collaborate for acquiring global competencies and multi-cultural skills for mutual benefit. If any university can engage students in the current issues by the in-video content, that content can be shared with other countries and certificate can be awarded and standards can be set. A degree can be awarded jointly with a legislative framework which allows a student to get knowledge in a collaboration manner. The focus must be laid on infusing research culture for solving the social and industrial problem in the participating nations,” he said.

Speaking on the challenges to international collaborations in higher education, G K G Sarath Godakanda, Minister Counsellor, High Commission of Sri Lanka said that there is need to ensure that the education policies in both countries are implemented in an effective manner. There is a great problem in research and innovation wherein MOUs need to be signed between universities to try in exchange of resources.

“The issues related to immigration related procedures for student mobility and Inter-country mobility of faculty have to be solved. There are challenges in terms of languages when other students come to India. With non-English speaking countries, there is need for credible approach for accreditation. Also, the elements of living condition and education and the whole system needs to be looked into in a more holistic context,” he said.

The Valence Group to Operate Under the Brand Name Piper Sandler