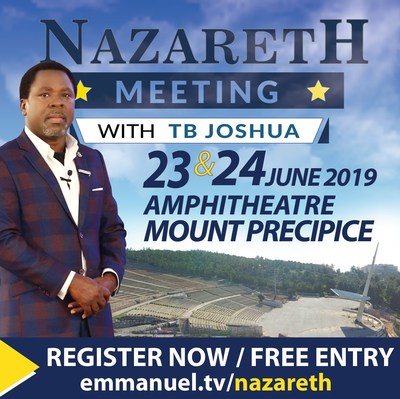 The event, tagged ‘Nazareth Meeting With TB Joshua’, is set for Sunday 23rd and Monday 24th June 2019 and is expected to attract thousands of foreign pilgrims into Israel.

Joshua has held several high-profile international events, predominantly in Latin America and Asia, but this will be his first meeting in the Middle East region.

“Nazareth is a humble place with people who live at peace. Our goal is to love one another just as ourselves, so everyone is welcome to attend our meetings,” the church said in a statement.

“We hope to be a blessing to anyone who interacts with us regardless of their religious or political background.”

At his ministry’s last event in Sheffield, UK on June 1st 2019, the FlyDSA Arena – one of the UK’s primary sport and entertainment venues – was filled to capacity with thousands more waiting outside, even though Joshua was not physically present.

The event will be broadcast on Joshua’s religious television station, Emmanuel TV, as well as livestreamed to Joshua’s 1,300,000 YouTube subscribers and 3,500,000 Facebook followers.

The Amphitheatre of Mount Precipice was last used a decade ago when Pope Benedict XVI celebrated a Mass there.

T.B. Joshua is the founder of The Synagogue, Church Of All Nations (SCOAN), an international Christian ministry headquartered in Lagos, Nigeria.

He is also the Executive Producer of Emmanuel TV, the world’s most watched Christian Ministry YouTube channel.

He is known as ‘YouTube’s most popular pastor’ due to the fame of his videos, which have been translated into multiple languages and viewed more than 500,000,000 times.

The SCOAN is West Africa’s foremost destination for religious tourists, with six out of every ten visitors to Nigeria headed there.

He has been recognised as one of Africa’s most influential people and received several international accolades for his extensive philanthropic activities.