NEW DELHI, Oct. 28, 2019 /PRNewswire/ — A bright October morning and 30 cyclists led by Chef Parvinder Bali, were ready in gear to ‘pedal-off’ the Sustainability Cyclothon, organised by the International Institute of Hotel Management (IIHM) and Indirapuram Cycling Club, Delhi. On 19th October, the Sustainability Cyclothon, celebrating International Chefs Day, took off from IIHM Delhi campus heading to IIHM Jaipur campus on the same day, covering a distance of 250kms in 18 hours. 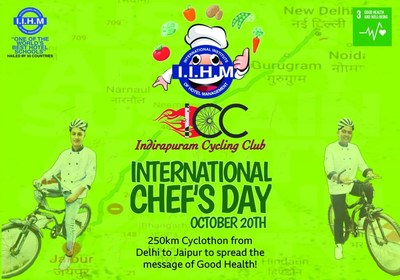 IIHM paid a unique tribute to all the chefs of the world on International Chefs Day on 20th October through this extraordinary idea. While showing respect to the talented chefs of the world, the Sustainability Cyclothon was aimed to spread the message of healthy living, creating a sustainable planet and also promoting Fit India movement. IIHM teamed with Indirapuram Cycling Club.

The cyclists followed National Highway 8 from Delhi to Jaipur, taking short breaks en route. After the pedal-off from IIHM Delhi campus, the cyclists first stopped at Iffco Chowk, Gurgaon where they were greeted by Chef Manjit Singh Gill, Corporate Chef ITC Hotels and President of Indian Federation of Culinary Associations and his team from ITC Hotels.

The cyclothon continued for another 52km before stopping at Bikaner Indian Restaurant at Manesar. The stop for refreshments was short with healthy and carefully packed breakfast for a quick meal was served and they set off again for a long ride. The second stop was a Tokas Hotel in Neemrana on the highway which is 120km from the start. This cosy midway hotel is a popular stop for travellers.

The cyclists regroup after every 50 or 80 kms as all have different cycling speeds. Regrouping together is important so that they start cycling together again and remain as a group.

The team continued cycling from there to Kotputli, the third stop of the Cyclothon which is 176km from the start. The fourth and final stop was at JW Marriot Jaipur Resort and Spa, where dinner and cake-cutting ceremony was organised for the cyclists team. JW Marriot marked 230km from the start Delhi. After dinner the cyclists left for IIHM Jaipur.

The next day, 20th October, was International Chefs Day and a short marathon of 3kms from IIHM Jaipur campus was held in the morning where an energetic Chef Bali along with IIHM students was again seen on the road, jogging along.

Later in the day, Chef Bali conducted a Masterclass at IIHM Jaipur infront of all cyclists, IIHM students, Executive Chefs and General Managers of Jaipur five star hotels who had assembled followed by the memento distribution ceremony at the IIHM campus.

Messages from across the country and the world:

Dr Suborno Bose, Chief Mentor, IIHM, said, “It’s a great way of celebrating International Chefs Day. Its important to bring awareness among people about healthy and sustainable world and also about keeping yourself fit at all times. IIHM has pledged to support the UN SDGs and through various activities like this cyclothon, we are showing our support for the cause.”

Chef Manjit Gill Remarked, “I wish Chef Bali and all the cyclists of Indirapuram Cycling Club, who are cycling from IIHM Delhi to IIHM Jaipur all the very best. On the occasion of International Chefs Day and to spread the message of 2019, how healthy food works. Ride safe, ride strong and make chefs proud. I wish I could also accompany you. All the best.”

Amidst all the excitement, YCO Mentor and Padmashri Chef Sanjeev Kapoor joined the cyclists during one of their halts via live video and said, “This is wishing Chef Bali and the cyclists all the very best for the cyclothon and International Chefs Day. Keep the chefs’ community strong and have fun.” He personally interacted with all cyclists over the video and motivated them to carry on with the same passion the message of good health and sustainability. His video can be seen at https://www.facebook.com/iihmhotelschool/videos/730245780773165/

IIHM Brand Ambassador, Chef Ranveer Brar also tuned in Live via Video call to say, “Wishing all the best to Chef Bali and all the cyclists from Indirapuram Cycling Club riding from IIHM Delhi to IIHM Jaipur. Ride safe, stay strong and make the entire chefs fraternity proud on International Chefs Day.” His video can be seen at https://www.facebook.com/iihmhotelschool/videos/654519351745413/

As news of the Cyclothon spread fast, noted people from around the country and the world, sent their good wishes. Michelin Chef Chris Galvin said, “Just to reinforce the importance of health through food. How we are cooking, how we are growing, our responsibility towards sustainability, forecasting when we are cooking. Just to ensure that we are not creating waste. We have a world to look after, we have our children, planet that we live on. We are the generation, the future and we have to look after it.” His message can be viewed at https://www.facebook.com/iihmhotelschool/videos/522791055241876/

Shri Mahendranath Pandey, Honorable Union Minister for Skill Development and Entrepreneurship, “The 30 cyclists on the occasion of International Chefs Day starting the journey from IIHM Delhi to IIHM Jaipur is commendable. The International Chefs Day slogan this year is Good Health and No Hunger World and it’s a right medium to express this thought. This initiative also supports our Honorable Prime Minister, Narendra Modiji’s Fit India Movement. Being an Indian, I support the chef cyclists and their participation in the Fit India movement and spreading awareness about it. Cooking, under skill India is a public skill and it’s a special skill. It’s a great medium for strong employment and this is contributing to the progress of our country.” His message can be viewed at https://www.facebook.com/iihmhotelschool/videos/451314398837815/

Heena Sidhu, Arjuna Awardee for Pistol Shooting also sent her message saying, “On the occasion of International Chefs Day, I would like to wish all the cyclists from Indirapuram Cycling Club travelling from IIHM Delhi to IIHM Jaipur spreading the message of Hunger Free and Healthy World. I would like to wish them all the best. Ride safe and make the sports and chef fraternities proud.” Her video can be seen at https://www.facebook.com/iihmhotelschool/videos/2440707639510325/

IIHM (International Institute of Hotel Management) is the largest chain of premier hospitality and hotel management schools across India that started its journey in 1994 at Kolkata. IIHM is a part of Indismart Group, the conglomerate that operates the Indismart Hotels. IIHM campuses are located across ten national and international cities with the associate institute IAM-IHM located in Kolkata, Goa and Guwahati. Students passing out of IIHM are armed with an international degree from the University of West London and equipped with global hospitality skills that enable easy placements in any hospitality brand across the world. IIHM is dedicated to its pursuit of excellence in teaching and placements. Real time experience is the key to success in hospitality and that makes the institute popular. In recent years, IIHM has been instrumental in organizing the Young Chef Olympiad, a unique idea and initiative inviting young culinary talents across the world to participate in the biggest cookery reality shows of all times.

The institute has bagged several prestigious awards in the past 24 years. The list includes the Best Education Brand Award from Economic Times in 2019. IIHM was also awarded as one among the World’s Greatest Brands & Leaders 2015-16 by URS International (IMEA – Process Reviewer PriceWaterhouseCoopers PL) and also received the Best Institute in Hospitality Education 2017 Award by Assocham from Dr. Mahendra Nath Pandey, Hon’ble Minister of State for HRD (Higher Education), Govt. of India.