NANJING, China, Dec. 18, 2019 /PRNewswire/ — Chinese commercial giant Suning Holdings Group has revealed its strategy for 2020, with the firm’s founder and Chairman Zhang Jindong announcing that in its 30th anniversary year the business will create more than 10,000 new stores and 8,000 new jobs, while investing at least 40 billion RMB (approx. EUR 5 billion) in new technologies and logistics infrastructure. 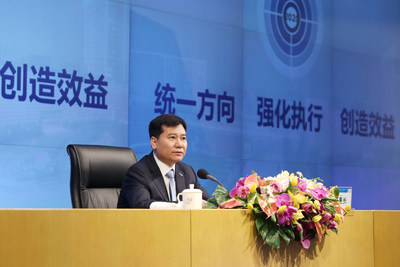 The company, one of the top three among the top 500 non-state-owned enterprises in China with annual revenues of RMB 602.5 billion (approx. EUR 77 billion), will continue to invest in its smart retail infrastructure to deliver an enhanced customer experience for a new generation of Chinese consumers.

A ‘consumption upgrade’ in China is being driven by an increase in consumer spend with the emergence of new, more aspirational and affluent consumer groups, along with increased purchasing power in China’s ‘lower-tier’ cities – smaller, less developed cities that make up half of the country’s population. This is creating an even greater opportunity for international brands looking to access the China market.

Zhang Jindong, Chairman of Suning Holdings Group, referring to China’s rising sophisticated middle class, said: “Chinese enterprises rely on a 40 trillion-scale consumer market. China’s market volume is the enviable and desired by any overseas company. As long as the company wants to do the business, there is room. Whoever can more effectively meet and match consumer demand at all levels will succeed in the future.”

As China’s economy has shifted from high-speed development to high-quality development, Suning will evolve from expansion at scale and quantity to the improvement of quality and efficiency. Speaking at a special meeting at the firm’s sprawling headquarters in Nanjing, Zhang outlined a strategy called ‘Open from 1 to N and Integration from N to1’.

Open from 1 to N refers to how Suning is opening up its core business of retail through multi-channel, full-scenario categories to empower the industry and society at large. Integration from N to 1 refers to the integration of Suning’s scenarios and supply chain, converging online and physical retail to focus on consumer experience and providing diversified services of a consistent quality for every consumer.

Since its creation in 1990, Suning has formed a smart retail ecosystem with retail at its core and industries such as finance and real estate revolving around it. By continuing to invest in retail infrastructure including commodities, integrated logistics warehouses – including those manned by robots and drones – and technology, the business aims to provide an enhanced consumer experience.

Announcing the strategy for the year ahead, Zhang also revealed that Suning has now opened more than 4,400 of its Retail Cloud Stores – the name given to its franchise model which unlocks the power of the firm’s value chain for entrepreneurs in more rural locations outside of China’s larger cities. Earlier in 2019, Suning acquired 37 Wanda Department Stores and an 80% equity stake in Carrefour’s Chinese operations for €620m, bolstering its bricks-and-mortar retail portfolio.

Founded in 1990, Suning is one of the leading commercial enterprises in China with two public companies in China and Japan. In 2019, Suning Holdings Group ranked as the top three brands among the top 500 non-state owned enterprises in China with annual revenues of RMB 602.5 billion (approximately EURO 77.24 billion) and continued to top the list of Internet retailing category. Adhering to the enterprise mission of “Leading the Ecosystem across Industries by Creating Elite Quality of Life for All”, Suning has strengthened and expanded its core business as retail through a corporate ecosystem comprised by multiple vertical industries, including commercial real estate, financial services and sports. Suning.com, the main subsidiary pioneering in online and offline retailing, has been listed in the Fortune Global 500 for three successive years from 2017 to 2019.