One of India’s most historic and premier tournaments, instituted in 1922

NEW DELHI, Feb. 26, 2020 /PRNewswire/ — The final match of the SUJÁN Northern India Open Polo Championship 2020 was held on 23rd February 2020 at the Jaipur Polo Ground, New Delhi. The Championship was sponsored by SUJÁN, ANAND and Gabriel India. It is one of India’s most historic and premier tournaments, instituted way back in 1922, to commemorate the visit of the Prince of Wales (later King Edward VIII) to India. 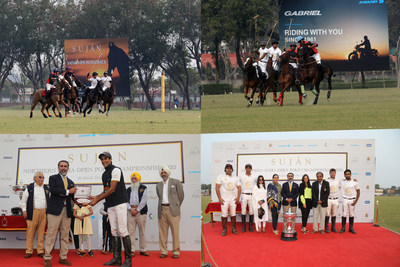 The extravagant event was witnessed by an enthusiastic crowd of more than 1500 people in attendance. The audience included dignitaries from royalty, business fraternity, army, diplomats and celebrities, along with employees and the families of sponsor companies.

Keeping the spirit of the finals, teams from Garcha Hotels and Golden Globe Hotels entered the field with some shinning spirit. It was an enthralling and closely contested final, but ultimately the extravagance of Golden Globe Hotels was on another height and they lifted the trophy with the score of 12 goals to 11.

Mrs. Anjali Singh, Executive Chairperson, ANAND and Gabriel India gave away the prize for the ‘Best Playing Pony’ of the Championship to the pony ridden by Mr. Manuel F Llorente of Garcha Hotels.

SUJÁN is a collection of five unique lifestyles in India and Kenya. In India, they have three sumptuous tented camps (SUJÁN Sher Bagh, SUJÁN The Serai and SUJÁN JAWAI), and an exquisite Royal Palace (SUJÁN Rajmahal Palace) in Rajasthan. Elephant Pepper Camp is located in one of the greatest wilderness areas of the world, hidden in a grove trees overlooking the Mara plains in Kenya. The SUJÁN Life is one of transformational experiences; of parts of the planet that we know intimately and treasure. Proudly family-owned and managed, the purpose is to protect, conserve and restore our wilderness.

Established in 1961, ANAND Group is a leading manufacturer and supplier of world-class automotive components in India. It offers experiential luxury through hospitality vertical, SUJÁN. Over the last six decades, it has formed alliances with leading global automotive companies. It has 17 companies out of which 12 are joint ventures. It has also formed 7 technical collaborations. The Group companies are spread across 60 locations and 12 states in India. It employees a dedicated workforce of 16,000 people. It also has a sizeable Exports and Aftermarket presence.

The flagship company of the ANAND Group, Gabriel India was incorporated in 1961. Gabriel India is a renowned brand synonymous with shock absorbers in India having established a significant presence across all automotive customer segments: the OEMs, replacement market and exports. The company provides the widest range of ride control products in India: shock absorbers, struts and front forks, across every automotive segment with over 300 product models on offer.

SGO, an oilless bearing manufacturer in Korea, establishes a subsidiary in India as a gateway to India