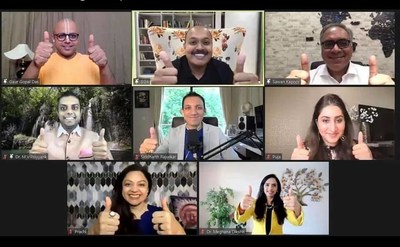 Each master coach engaged the audience through their 21-minute keynote that focused on the theme of ‘Navigating through the stages of Struggle, Survival and Success’ built around their unique experiences, insights, and expertise that provided for an intimate and engaging virtual-summit all through the day.

The event kicked off with Siddharth Rajsekar, Master Digital Coach and Author of the Amazon Bestseller Book – ‘You Can Coach’,  assuming the role of host by introducing the energetic and charismatic, Actor and National Film Award winner, Ashish Vidyarthi. Ashish managed to charge up the crowd with his ‘flawsome-awesome’ & ‘power-packed’ keynote that focused on motivating the viewers to take charge of their own lives in the realms of business, relationships and success by assuming the role of the prime-player in their own lives.

The energy was further boosted by Transformational Coach, Prachi Mayekar, who truly kicked off the event with her engaging game-led interactions with the audience that focused on memory, mindset and present-tense. Her energy radiated through the zoom-screens that started to see a lot of interaction and enthusiasm coming in from the chat-window. “Everything in life is related to energy. Your energy is your vibe, your signature. You are what you look for. This is why most people end up with futures that resemble their past. Break free from this rut. Take control of your vibe. Create your own signature and you will see your future changing for the positive,” she concluded.

The day proceeded through the likes of Surendran J, founder of Success Gyan, sharing his excitement and passion that led to the formation of Success Gyan and the Super Growth Summit. “When we started off in 2012, with the tagline ‘Inspiring India’, we were a small group of individuals motivated to inspire India through trainer-led coaching sessions that would truly revolutionize the education industry in the country. Over the next five years, we aspire to change this tagline to India Inspiring the World, by building a breed of unique leaders and coaches, through sessions and interactions such as the Super Growth Summit that aims to cultivate the leader inside of you and help you navigate through the stages of struggle, survival and success,” he said as part of his keynote at the event.

Thaddeus Lawrence, Integral Coach® & TEDx speaker, tuned in from Singapore, to the take the audience through his physically and mentally engaging speaker session that delved into areas of ‘Insourcing Agency’ and “Assuming Control of one’s own Destiny’ through tips on building a growth-mindset. He took the audience through the experiences he had in Kazakhstan while learning Archery, where his coach persistently used words of encouragement even while Thaddeus was continuously missing his target, much to his own amusement. He later learnt that the coach was motivating him because his arrows consistently fell in one area which the coach felt was much better than a once-in-a-bluemoon bullseye. “If you are consistent with your actions, success will appear,” he concluded.

Dr John Demartini drove the audience through the psychology of winning and the mindset-shift required to truly progress through the stages of struggle, survival and success. The genuine versatility of the event was on-display when M V Priyank, led a session on ‘Sound Healing’ and ‘Meditation Techniques’ that could be used to orient oneself in a thrival and success-focused mindset.

Rajiv Talreja, Asia’s leading Business Coach, took the audience through the tips and tactics that he has been implementing to advance through the different stages of Business. He broke down the core theme of the event, elucidating the challenges one faces while advancing through the stages of Struggle, Survival and Success. “Struggle is the stage of entrepreneurial journey where one isn’t paying themselves, while survival is the stage where you are able to pay yourself but end up being comfortable due to the lack of ambition. Success is the stage where you are able to not-only pay yourself but also loop-back to the business. This is only achieved by adopting a growth-mindset that approaches business problems and challenges through a ‘Never settle attitude,” he concluded.

The event concluded with a keynote from the most anticipated guest, Gaur Gopal Das, who is an Indian lifestyle coach, monk, motivational speaker and member of the International Society for Krishna Consciousness (ISKCON). Gaur brought to the table his evergreen simplicity and charisma through analogies that manage to touch humour while making deep and impactful points, simultaneously. “When a traveller was faced with the challenge of either giving up a raft that had previously  helped him overcome a river or get stuck in the forest that lay in front of him due to the girth of the tool. He had to let go of the raft. This is much like the learnings that you accumulate through the stages of struggle and survival. The same tools might not be applicable for the next stage of super growth. Learn to let go and detach yourself from the tools of the past and set yourself up to be ready for new and unprecedented challenges that may come your way. This is the true way to success and super growth”, the charismatic monk noted to conclude the event.

Motivated by the positive turnout and feedback from the audience, Success Gyan announced its plans to host the next Super Growth Summit on September 11th, 2021. For more information, check out the https://www.supergrowthsummit.com/

Launched in 2012, Success Gyan is one of India’s top training platforms that was built with an aim to inspire, empower and encourage people to transform their lives with world class education and training in all key fields of life like Personal Development, Business Acceleration, Career Upgradation, Financial Management and many more.