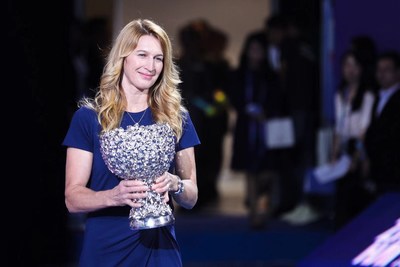 Graf won a phenomenal 22 Grand Slam titles during an illustrious career. Seeing the first 19 events of 2019 won by 19 different women, four different Slam champions, and a continual clash of generations as the tour’s youth has taken the reins, Graf has found the 2019 WTA season a compelling watch.

Graf mentioned, “A lot of players that play on the high level maybe sometimes struggle to keep it up all year long, but they’re always capable. And seeing especially the younger girls now being less afraid and going out there and going for it, I just think it’s become a lot closer, the level. I think that’s what makes it interesting, that you do not always know.”

When being asked to offer any advice for the surging teenager, Coco Gauff, a young phenom of the US who has risen like a rocket, Graf laughed.

“It doesn’t seem like she needs a whole lot of advice,” Graf said, “I mean just watching, talk about somebody that’s enjoying herself out there. You can see her intensity and incredible athleticism. “It’s going to be incredible to follow her the next few years. She’s got such an effortless style and such raw talent.”

Graf has served as the Tournament Ambassador for the WTA Elite Trophy Zhuhai since 2016. Watching the continued rapid development of the city of Zhuhai and the tournament itself has been a rewarding experience for the Hall of Famer.

“During my career, I never got a chance to come to China,” Graf said. “So it took me a little longer and obviously a lot of things have changed.

“Seeing the popularity that tennis has here now and being part of something over the last few years, the tournament has become much more established. Seeing how the interest has grown even to the point where there are a lot more tournaments in the area, as the ATP tournament even this year,” Graf said, “Being part of that growth and seeing tennis become more popular here, and more common, it’s something that I found very enjoyable.”

Situated in the Pearl River Delta, one of the most developed areas in China, Zhuhai enjoys a beautiful city view and the most convenient traffic. With the recently completed Hong Kong –Macau-Zhuhai sea bridge, it only takes 30 minutes by car among the 3 cities.

First Unmanned, Autonomous Crossing of the Atlantic Ocean, from East to West, Completed by Saildrone, Inc.