BANGALORE, India, May 7, 2021 /PRNewswire/ — Star Air, an emerging regional airline and part of Indian business conglomerate Sanjay Ghodawat Group, made headlines with its passenger load factor. As per the data revealed by a prominent agency from the aviation arena, Star Air topped the Passenger Load Factor (PLF) chart outpacing all other national and regional carriers. As per the report, Star Air had a PLF of 79.0% in February 2021, which is recorded as the highest in the industry during the said period.

Incepted in January 2019 to transform the landscape of regional air connectivity, Star Air has significantly earned the trust of flyers across the nation with its world-class yet affordable scheduled and non-scheduled flight services.

Apart from the PLF, the airline, in the past, has also been acknowledged for its On-Time Performance (OTP) record as one of the best in the industry.

The company has connected various Tier-II and Tier-III Indian cities with the Metros under an affordable flying RCS-UDAN scheme. It currently offers scheduled flight services to 13 Indian destinations and also caters to the demands of charter flight services at domestic and international level.

“It is really a proud moment for all of us at Star Air. Our timely services, economical fare, connectivity, and zeal to deliver the best to our flyers every time are the key reasons why Star Air has been able to lead the way even during this tough times. I credit all this success to the entire team of Star Air for their continued efforts in all departments.” says Mr. Shrenik Ghodawat, Director – Star Air.

Headquartered in Bengaluru, Star Air with its fleet of 5 Embraer-145 is expanding its business operations extensively across India. As per the company officials, it will soon start its services from Nagpur and Jamnagar.

Sanjay Ghodawat Group is a prominent Indian business conglomerate that has its presence in various high-value business verticals ranging from salt to software. Aviation, Consumer Products, Education, Energy, Mining, Realty, Retail, Software and Textiles are some of its key business domains. SGG was incepted in 1993 and since then it has witnessed an impressive growth under the splendid stewardship of its Founder and Chairman – Mr. Sanjay Ghodawat. With a strong base of millions of customers across India, SGG is moving ahead with great vigour and bringing significant changes in people’s lives with its wide range of high-quality products and services. 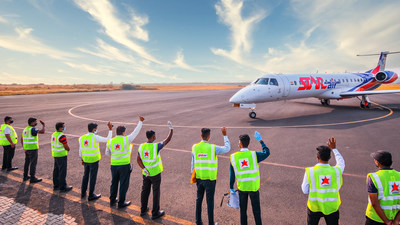