BENGALURU, Aug. 19, 2019 /PRNewswire/ — Global humanitarian and founder of The Art of Living, Gurudev Sri Sri Ravi Shankar, is in Caracas for the second round of meetings with political leaders to find a peaceful and non-violent solution to the ongoing social and political logjam in Venezuela. 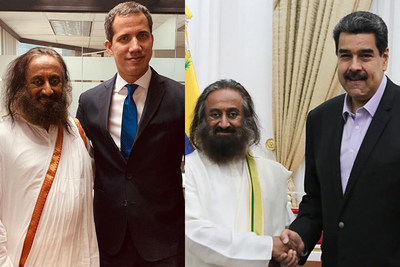 During his visit, Gurudev was received by a delegation led by President Mr. Nicolás Maduro, Vice President Ms. Delcy Rodriguez and Foreign Minister Mr. Jorge Arreaza. Gurudev also met with Mr. Juan Guaido, Venezuelan politician and President of the National Assembly who is recognized by the governments of 60 countries, as well as opposition leader Ms. Marina Corina Machado.

He urged both sides to resume discussion in a cordial atmosphere. Both sides reassured Gurudev that the dialogue would begin again in the best interests of the nation. Gurudev also requested Mr. Maduro to release political prisoners and resume the dialogues at the earliest.

“We cannot delay finding a solution. The suffering is mounting continuously. I urge all the political leaders to come to the table, talk and resolve the conflict as soon as possible. It is a matter that should be treated with a sense of urgency,” Gurudev Sri Sri Ravi Shankar insisted.

Gurudev Sri Sri Ravi Shankar is a global humanitarian leader and peacemaker. He founded The Art of Living and its sister organization – The International Association for Human Values, that works in special consultative status with the United Nations (UN) and the World Health Organization (WHO). The organizations have successfully implemented multitude of service initiatives and projects, which include conflict resolution programs, disaster relief, post-traumatic stress relief, sustainable rural development, empowerment of women, prisoner rehabilitation, education for all and environmental sustainability with the goals of creating a happy, stress-free, violence-free society where human values are nurtured.

Gurudev has inspired specific trauma-relief and meditation programs for at-risk youth, war veterans, prisoners and survivors of natural disasters. He has personally played a prominent role in promoting peace in several long-drawn conflicts in the Middle East, India, Africa, and Latin America.

He has been awarded honorary doctorates by 16 universities for his peace-keeping work.

He has also received 37 awards from various governments for his humanitarian work. He has been featured on CNN and The New York Times. He contributes to The Huffington Post and has authored more than 40 books.

UNESCO named him one of the most outstanding speakers of the century and Forbes ranked Sri Sri as the 5th most powerful person in India.