Specialist Auction of Antique and Vintage Photographs of India 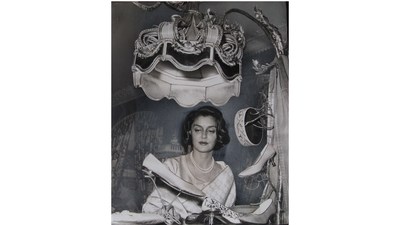 From the Taj Mahal in the North to the Charminar in the South and from the Ajanta & Ellora Caves in the East to Calcutta of the 1960s in the West, the specialist and unique auction covers photos of 35 towns, hill stations, cities and states of India showcasing its natural beauty and monuments of its greatness – Red Fort, Charminar (Hyderabad), Hawa Mahal (Jaipur), Teli Ka Mandir (Gwalior), Chepauk Palace (Chennai) and  Victoria Terminus Railway Station (Mumbai) to name a few. A  section is dedicated to the rulers of India’s former Princely States of Alwar, Baroda, Bhavnagar, Cooch Behar, Dharangadhra, Hyderabad, Indore, Jaipur, Kapurthala, Jammu & Kashmir, Mysore, Nawanagar, Patiala, Palitana and Rewa among many others.

A standout picture and one that has probably never been seen before is  titled ‘UNDER A ROYAL CANOPY,’ and inscribed “Shoes and slippers from India were displayed recently in London, here being inspected by a Royal Visitor, the Maharani of Jaipur. One of the most beautiful women of the world, H. H. Gayatri Devi wife of one of the world’s richest men.” Photograph from AP News Features Photo, London, dated 7 October 1962. This lot (No. 139) is estimated at Rs 36,000 – 48,000. Other pictures of the Maharaja’s, Nizam’s and Maharani’s, in regal and formal western attire, include those with Hollywood actors of yore such as Gary Cooper, Jean Arthur, Cyd Carisse, Ann Miller, Eva Bartok and Jane Buckingham. Many of the pictures of the Royal’s are accompanied by typed notes and photo credits.

Vintage photos depicting political events – the Delhi Durbar, Queen Elizabeth’s first visit to India (being driven through the streets of New Delhi and Calcutta), Lord & Lady Mountbatten in the State Coach to Viceroy’s Palace (Rashtrapati Bhawan) upon their arrival to India, S. Radhakrishan (second-President of India) being assisted by the Shah of Persia in Iran, Maharani Gayatri Devi with Prime Minister Indira Gandhi (her school mate from Shantiniketan) during an election campaign and an iconic photograph of Mahatma Gandhi addressing students at Vellore Medical School, with wife Kasturba Gandhi by his side – are also on offer.

It is probably the largest lot-wise dedicated auction of photographs from 19th century India with estimates starting from just Rs 9,000 and going up to Rs 60,000 it is a good starting point for first-time collectors. “A standalone auction in this category is still in its infancy in India, but we know that fascination for nostalgia and inquisitiveness of how our towns and cities looked like in the past will draw in even the newer and younger collectors to this medium,” says Ankush Dadha, Director, Bid & Hammer.

With a new look bidding software, integrated with the ability to download mobile apps and bid from the phone, this E-catalogue only online auction of Antique & Vintage Photographs by Bid & Hammer follows closely on the heels of its last successful online sale of Traditional, Modern & Contemporary Indian paintings in November 2019 that had works of masters like Manjit Bawa, Jagdish Swaminathan and M F Husain. For details and to register to bid for these vintage collectibles visit the website www.bidandhammer.com or download the app from the Android Playstore or App store. The lots can be viewed in New Delhi by prior appointment.