– The largest international event in Asia-Pacific region will provide a variety of events such as conferences, exhibitions, and civil participation events

ILSAN, South Korea, Aug. 26, 2019 /PRNewswire/ — ‘2019 World Smart City Expo (WSCE 2019)‘, the largest smart city international event in Asia-Pacific region, hosted by the Ministry of Land, Infrastructure and Transport (Minister: Kim Hyun-mee) and the Ministry of Science and ICT (Minister: You Young-min) and jointly organized by LH, K-water, and KINTEX, will take place in Goyang KINTEX from September 4th to 6th. 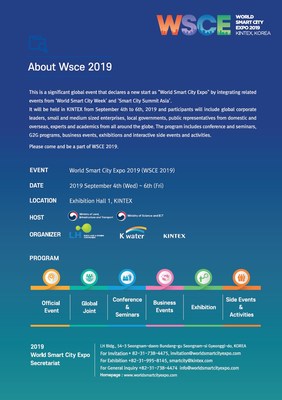 This year’s event integrates the World Smart City Week and the Smart Cities Innovation Summit Asia, which were held in 2017, and other Korean smart city related events. It is newly named ‘World Smart City Expo 2019‘. The event is prepared for a new start as a global leading smart city event.

Under the theme of ‘Smart City, Connecting Tomorrow’, many kinds of events will be held not only for Korean and international city experts, related companies, governments and international organizations related to smart cities but also for citizens such as Makeathon, Idea Contest, and Talk Salon.

The opening ceremony on September 4th will be attended by some 350 people from about 30 countries, including domestic international experts, governments, business people and mayors of overseas cities who are participating in various programs during the event.

In addition, a world-leading urbanist, Florida Richard, a professor at the School of Management at the University of Toronto, is invited as the keynote speaker.

In particular, the event is planned to spread public awareness and consensus on smart city policies by sharing various ideas about smart cities with the participation of all citizens, both children and adults.

Talk Salon, which will be held in the form of a talk show, is designed to enhance the general public’s understanding of smart cities through a humanistic interpretation and perspective and will be open to everyone. Professor Jeong Jae-seung, the Master Planner of the Pilot Smart City of Sejong 5-1 Life Zone, which is promoted as the government’s core policy project, will lead the talk show with the theme of ‘How Much Do You Know about Smart Cities?’ at KINTEX on September 5th.