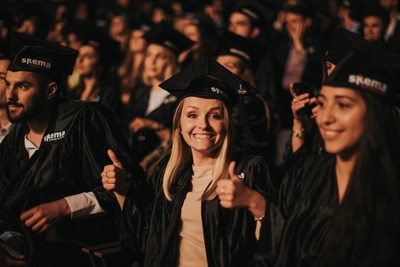 SKEMA has been included in this ranking since its creation in 2009. It has now entered into FT’s list of the top 15 of the world’s best business schools at a remarkable pace.

In France, SKEMA’s Master in Management has been placed 4th among the 22 best French Grandes Ecoles represented.

In this global panorama, alumni’s appreciation of their school, their integration and their professional evolution over three years represents half of the evaluation. SKEMA stood out particularly in the ‘aims achieved’ category that takes into account the objectives achieved by the alumni due to their diploma and ranked 6th worldwide. In the ‘international experience’ category, SKEMA ranked 9th.

The school’s progress is an apt reflection of the pedagogical model it has developed: to share the incomparable wealth of a truly global and multicultural experience to its students representing 120 nationalities on its 7 international campuses.

Alice Guilhon, the dean of SKEMA, said: “We can measure how far we have come since we entered the ranking in 2009 and be proud of the progress we have made so far. This is a great recognition of the school’s internationalisation strategy and the success of our graduates. Being ranked 12th in the world is a deeply satisfying reward as SKEMA celebrates its 10th anniversary this year.”

With 8,500 students of 120 nationalities and 45,000 graduates in 145 countries, SKEMA Business School is a higher education institution that, through research, 50 teaching programmes and its international multi-site structure, trains and educates the people needed by 21st century companies. The school is now located on 7 sites: 3 campuses in France (Lille, Sophia-Antipolis, Paris), 1 in China (Suzhou), 1 in the United States (Raleigh), 1 in Brazil (Belo Horizonte) and 1 in South Africa (Cape Town).

In September 2019, the school announced the official launch of its Global Lab in Augmented Intelligence and its new R&D center: SKEMA Quantum Studio.

SKEMA has triple accreditation from EQUIS, AACSB and AMBA.