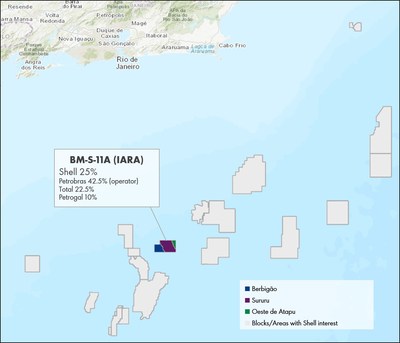 The FPSO can process up to 150,000 barrels of oil and 6 million cubic meters of natural gas daily. Operated by Petrobras, P-68 features ten producing wells and seven injection wells.

This new production at P-68 adds to Shell’s already prolific deep-water portfolio in Brazil. With the development in Iara, the company is opening a new production frontier in the Pre-Salt. This is also the first step in developing the large resource potential at Sururu.

“It has been a banner year for Shell Brasil,” said Wael Sawan, Shell’s Upstream Director.  “From winning new acreage to setting records in drilling and production, the country continues to solidify its place as a heartland in our Upstream portfolio.”

“Brazil is home to some of the best deep-water opportunities in the world and we look forward to working with Petrobras and other partners to progress additional development plans,” he added.

Other updates from Brazil

The P-69 FPSO, located in the Lula field, reached peak production levels just over 10 months from first production.  Shell’s oil and gas production in Brazil in the fourth quarter is expected to be around 400,000 barrels of oil equivalent per day.

The two blocks awarded to Shell in the 16th concession deep-water bid round were the latest additions to a robust portfolio of 2.6 million net acres with 21 exploration blocks, 4 development fields and 11 production fields in Brazil.

Shell Brasil is also carrying out exploration activities in the Gato do Mato and Alto do Cabo Frio Oeste blocks in the Santos Basin to secure future development.  In June, the company started a drilling campaign in Gato do Mato and delivered the fastest-drilled well in Brazil. Seismic work at Gato do Mato is ongoing. In 2020, new exploration drilling activity is expected at the Saturno block in the Santos Basin. Shell Brasil seeks to be an early mover in areas with discoveries, de-risking these opportunities and driving towards a higher chance of success.