SHANGHAI, Oct. 29, 2021 /PRNewswire/ — Shanghai Electric (the “Company”) (SEHK: 02727, SSE: 601727) announced that the record for the turnback time of metro trains has been smashed by the TSTCBTC®2.0 signaling system in a live demonstration carried out by THALES SEC Transport (TST), Shanghai Electric’s joint venture with Thales. The new record in a verified test was 86 seconds, 26 seconds shorter than the average turnback time of trains operating on Shanghai Metro Line 5. 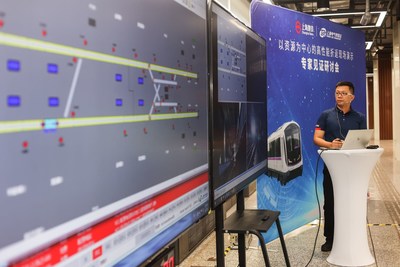 “Though 26 looks like a simple number, it represents a huge technological innovation in urban rail transit. The shorter turnback time allows higher frequency of train services, shorter headway, as well as increased stability and safety, making the overall metro system more energy efficient. It not only fulfills the need to increase the operational capacity of urban rail systems fueled by ever-growing passenger volumes but also marks a milestone of TST’s innovation in CBTC signaling,” said Liu Huiming, CTO of TST.

A solution tailored to the needs of Chinese markets and users, the TST-developed TSTCBTC®20 is a disruption-free mobile blocking system with high operational efficiency and low cost. It can drastically boost the departure density of metro trains and help them operate at the highest speed, bringing the efficiency of metro lines to a maximum level.

As the first signaling system featuring a dual CBTC (Communication Based Train Control) architecture with full redundancy ever deployed in China, TSTCBTC®2.0 inherits the key advantages of the SelTrac™ CBTC signal system, including true moving block, two-way ATP/ATO and the ability to provide flexible operational support, while the high availability and reliability of its unique dual CBTC architecture greatly reduces life cycle costs and facilitates maintenance.

On top of applying the highest safety standards, TSTCBTC®2.0 eliminates the need for a traditional backup system, therefore, removing the potential safety risks posed by the switchover between the different systems. Certified by Bureau Veritas and TÜV SÜD and China Railway Construction Corporation (CRCC), the system has also received the China Urban Rail Certification, making it the first certified CBTC product in China.

Liu Huiming said in the demonstration that the new record means that the CBTC signal system and the “resource-centric” RET technology have become two crucial breakthrough points when it comes to upgrading and transforming transportation capacity.

Building upon the groundbreaking achievements in the development of urban rail transport, Shanghai Electric will continue to make audacious moves to explore the applications of smart trains as well as the next-gen “resource-centric” signal system in an effort to boost the safety and efficiency of urban rail transit. Shanghai Electric is committed to becoming a pioneer in China’s urban rail CBTC signal system, providing world-leading solutions to improve urban mobility.